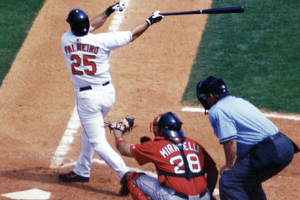 As we begin week five of the tournament, top seed Rafael Palmeiro and fellow Cooperstown pariah Sammy Sosa lead the way in a league featuring Hall-of-Famer Mike Piazza, Orlando Cabrera, and stars of yesteryear Kip Selbach, Bob Fothergill, Elmer Valo, and George Selkirk. How will it shake out?

There is no doubt Rafael  Palmeiro put up some tremendous numbers over a long career. His 3020 hits mark him as the only Hall-of-Fame eligible player not actually in the Hall of Fame. He also has the fourth-highest home run total (569) of someone who doesn’t even appear on a HOF ballot. In 2020, he will again appear on the voting ballot. Fingers crossed.

Sammy  Sosa has some impressive numbers of his own: a seven-time All-Star, an MVP award, and averaged 58 HRs a year over the five year period 1998 – 2002. All told, he hit 609 career taters and drove in over 1600 runs. He also stole a few bases when he was younger. Like Palmeiro, steroid rumors have so far kept him out of “The Hall.” Again, fingers crossed.

One of the top catchers of all time and a truly exceptional hitter, Mike Piazza split his career, for the most part, between the major markets of Los Angeles and New York, playing seven years with the Dodgers and eight with the Mets. In that time he hit at a .308 clip and pounded out 427 home runs. He has a good blend of average and power for this tournament.

A dead-ball era star, Kip  Selbach qualified for the playoff based on his stolen base total, 334, and his 149 career triples. His .293 lifetime batting average, which he compiled in the National League before 1900 and in the American League after, is also nothing to sneeze at.

Imagine hitting .324 over your first four big-league seasons and only getting about 200 plate appearances a year. That was Bob  Fothergill‘s fate. He was the fourth outfielder for the Detroit Tigers during the period when they had Ty Cobb and Harry Heilmann patrolling the pastures. He still managed a .325 career batting average which was good enough to get him into the playoff.

Orlando  Cabrera picked up two Gold Glove awards at shortstop in his fifteen-year career. He also rapped out 459 doubles which is what qualified him for the tournament.

Elmer  Valo just squeaked into the playoff by virtue of his 954 career bases on balls. That bumped his on-base percentage to a quite respectable .398 which incidentally is higher than his career slugging average of .391. Well, he was on first base a lot.

Primarily known as Babe Ruth’s replacement, George  Selkirk had a short, decent career with a .290 batting average over 9 years. He also had an on-base plus slugging average high enough to rank among the leaders, which is what earned him a place in the tournament.

While no Babe Ruth, George Selkirk proved himself to be no slouch at the plate, taking the season by a shocking nine games over second-place Mike Piazza. The Bob Fothergill team led with a .235 average versus the league’s .209.

In highlights, the Fothergills had an 18-hit, 12 – 0 shutout of the Piazzas and there were two no-nos – one by Cy Young and another in which Tom Seaver of the Piazzas was perfect through 9 1/3 innings, walked a Raphael Palmeiro and then promptly had him erased in a double play to end the game.

Selkirk and Piazza are joined by Elmer Valo and Kip Selbach in Round 3. Sammy Sosa missed the cut by a single game so he and the others head to round two.