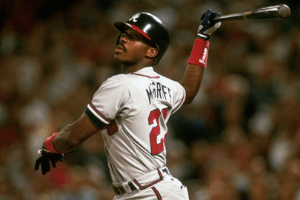 Top seed Fred McGriff faces off against Hall-of-Famers Barry Larkin and Home Run Baker as well as stars from many eras. Moises Alou represents the 1990s-2000s, Roy White covers the 60s and 70s, Bing Miller the 20s and 30s, Les Mann the 19-teens and 20s, and Walt Wilmot the 1890s.

If there had been no strike in 1994, or if Fred McGriff had finished his career in Colorado he would be in the Hall-of-Fame already. As it is, he finished his nineteen-year career just shy of the magic 500 home runs with 493. His batting record also shows copious doubles, runs and RBIs, and a boatload of walks that boosted his .284 batting average to a healthy .377 OBP. In fact, his On-base Plus Slugging is an impressive .886, ranking “The Crime Dog” 83rd in that category, right between Hall-of-Famers Goose Goslin and Eddie Matthews. Here’s hoping that the Veterans Committee does the right thing.

One of the great shortstops in the history of the game, Barry Larkin was a five-tool player, winning 3 Gold Gloves, being named to twelve All-Star teams, and picking up an MVP award in his nineteen-year career with the Cincinnati Reds. Plenty of runs, RBIs, and stolen bases, along with a .295 lifetime batting average make him someone to watch in the tournament.

The latest star of celebrated Alou family, Moises Alou had a wonderful career that could have led to the Hall-of-Fame if he had been able to avoid injuries. As it was, he still was a six-time All-Star and managed to score and knock-in over 1000 runs, hit 332 home runs, and end with an impressive slash line of .303 / .369 / .516.

While his power levels might leave modern fans scratching their heads over his nickname, Home Run Baker was the premier power hitter of the first decade of the 20th-century, leading the league in round-trippers 1911-14 and triples in 1909. In fact, his 103 lifetime triples alone would have qualified him for the playoff as would his .307 batting average.

Although he got a late start, Bing Miller played sixteen seasons until the age of 41. A talented pinch hitter, Miller retired with a lifetime .311 batting average. He also just missed getting points in several categories, so he might do better than expected in the tournament.

Walt Wilmot played for the Washington Senators, Chicago Colts, and New York Giants in the National League 1888 to 1898. Just a bit better than average at the plate, he qualified for the playoff based on his inflated 19th-century stolen base totals. I do not hold out high hopes for him.

While Les Mann‘s 106 triples were enough to qualify him for the playoff, he also hit .282 over his sixteen-year career, including becoming a good pinch hitter at the end.

A New York Yankee for all his fifteen seasons, Roy White made his way through the offense depressed 1960s and 70s with a .271 batting average and enough walks to boost his on-base percentage to .360. He also had a little pop, maxing out at 22 home runs in 1970. He qualified for the playoff based on Win Probability Added.

I guess the folks who came up with WPA know something! Unfortunately for him, Roy White’s late surge came up short, as Home Run Baker took the season. Baker led in hitting by more than 20 points, batting .246 vs. the league’s .213.

Baker and White head to Round 3 along with Barry Larkin and Moises Alou. The others will take their chances in Round 2.