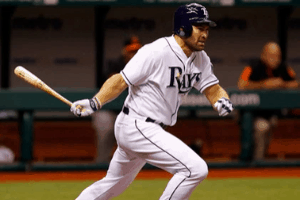 Top seed Johnny Damon takes on an unusual assortment of players from history. Third baseman Graig Nettles, Hall-of-Famer Buck Ewing, and turn of the century player John Anderson make up the top half of the eight teams and catcher Spud Davis, the speedy Tom Goodwin, baseball pioneer Charley Jones, and hard-hitting Vic Wertz round out the bottom half.

Johnny Damon was drafted out of high school and so got a couple of years head start on many players, giving him eighteen seasons to rack up the counting stats and meeting the qualifying numbers for the playoff in numerous categories. He played 2490 games, scoring 1668 runs on 2769 hits. Among them were 522 doubles, 109 triples, and although not over the qualifying mark, 235 home runs. He had 1139 RBIs and stole 408 bases and picked up 1003 walks. Overall, he hit .284 and was named an All-Star twice. Don’t be surprised if he ends up in the Hall-of-Fame someday.

Another guy who played seemingly forever, Graig Nettles hit only .248 in his twenty-two-year career but combined it with plenty of pop, knocking 390 home runs and driving in 1314 RBIs. His 1088 walks boosted his on-base percentage to a very reasonable .329 OBP. An excellent fielder, he won two Gold Gloves and was named to six All-Star teams.

Buck Ewing is not exceedingly well-known today but was highly enough regarded to be the first catcher elected to the Hall of Fame in 1939. Said to possess an extremely strong arm, Ewing hit .303 over his eighteen seasons. His qualifying numbers also include 178 triples and 354 stolen bases.

“Honest John” Anderson was one of the few switch hitters of his time and one of only three major leaguers born in Norway. His fourteen-year career was split between six teams where he hit .290 with 124 triples and nearly 1000 RBIs. He also stole 338 bases which qualified for the playoff.

A catcher who can hit is a rare and special thing. One that hit .308 over a sixteen-year career should be revered. So why isn’t Spud Davis held in higher regard? I did a search for “highest lifetime batting average by a catcher” and his name didn’t come up! His .308 is the third highest in baseball history and qualified him for the tournament. He is also in that special category of players who actually benefitted from World War II. He came out of a two-year retirement to log an additional two seasons in 1944-45.

Fourteen years in the big leagues left Tom Goodwin with a .268 lifetime batting average and a qualifying 369 stolen bases. Four times, he stole 50 or more which is pretty good for a modern player.

Charley Jones was there in the early years of professional baseball, starting with the Keokuk Westerns of the National Association in 1875. In his twelve seasons, he played for eight teams in seven cities in three leagues and was even blackballed from baseball for two years. What interests us is his 102 triples that qualified him for the tournament and his solid .298 lifetime batting average.

It’s a shame that the first thing I think of when Vic Wertz is mentioned is one long fly ball that was almost miraculously caught by Willie Mays in the 1954 World Series. He played for seventeen seasons, slugging 266 home runs with 1178 RBIs while maintaining a .277 batting average. He’s in the playoff based on his placement in the Win Probability Added leaders list.

19th-century catcher and Hall-of-Famer, Buck Ewing batted .225 as a team vs. the league’s .206 to take the top spot in a fairly close season. Spud Davis3 led the individuals with a .250 batting average.

Usually, the top 4 teams make it through, with the bottom 4 going to the second chance round but joining Ewing, Charley Jones, Graig Nettles, and Spud Davis is last-place John Anderson. Anderson had a positive run differential, so he joins them in Round Three. Vic Wertz, Johnny Damon, and Tom Goodwin will head to Round Two for a second chance.