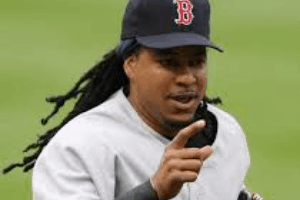 Continuing Round One action brings us three Hall-of-Famers and a future one in the league of eight. Manny Ramirez and Mike Schmidt bring the power against Ed McKean, George Wood, Roy Sievers, David Wright, and HOFers Tommy McCarthy and George “High Pockets” Kelly.

The pride of Ohio University, Mike Schmidt developed into possibly the greatest third baseman in baseball history. Besides being a stellar fielder, he could flat out hit. He won three MVP awards and I don’t have to tell you how hard it was to hit 548 homers during the 1970s and 1980s. Although he struck out a lot, he drew more than his fair share of walks, too. I suspect he would do exceptionally well in today’s game.

Ed McKean played primarily for Cleveland in the 1880s and 1890s. Born in nearby Grafton, Ohio, McKean played for both the American Association Blues and the National League Spiders, compiling a .302 batting average with 158 career triples.

Another nineteenth-century player, Tommy McCarthy was inducted into the Hall-of-Fame for being a keen baseball strategist – he invented the hit-and-run – and also had 452 stolen bases.

George Wood primarily played in the 1880s where he grew a noteworthy mustache and banged out 132 three-baggers, earning him a slot in the tournament.

After a 17-year career, Roy Sievers ended with 318 home runs which was enough to earn him a spot in the tournament.

We have another great third baseman in this league in David Wright. A seven-time All-Star for the New York Mets, Wright qualified for the tournament for ranking among the leaders in OPS – On-base Plus Slugging. His .296 batting average is no minor matter, either.

George “High Pockets” Kelly hit .297 in a sixteen-year career. I’m not sure his numbers warrant election to the Hall-of-Fame, but he is in there so he is in here.

A late push down the stretch by David Wright was not enough to catch Phillies great Mike Schmidt as Schmidt’s 65 homer lead more than made up for Wright’s 39 point lead in batting.

One of the David Wrights had a 3-HR game and there were 5 no-hitters on the year, including perfect games by a Tom Seaver and a Cy Young. Of special note: On May 17th, Tommy McCarthy and George Wood endured a titanic, 37-inning game that saw 261 plate appearances. Wood won it, 2 – 1.

Schmidt and Wright are joined by Ed McKean and Manny Ramirez in Round 3. The others will have a second chance to move ahead in Round 2.