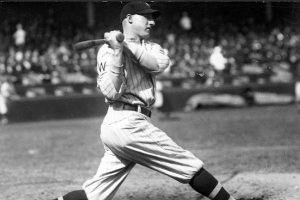 Goose Goslin and Mickey Cochrane represent the Hall-of-Fame contingent in today’s season. They face the power of Darrell Evans and Andruw Jones as well as the particular talents of Jack Fournier, Chris Speier, George Case, and Jim Gentile.

While he was never held in the regard a player of his caliber could expect – his career overlapped and was overshadowed by Ruth, Gehrig, Greenberg, etc. – Goose Goslin compiled some spectacular numbers over the course of his 18-year career. He batted .316 with 2,735 hits, 500 of them doubles along with 173 triples and 248 home runs which earned him election to the Hall-of-Fame in 1968.

One of my favorite players in my youth (partially because of the similarly named Dwight Evans), Darrell Evans managed some significant power numbers while playing through the somewhat offensively deprived 1970s and 80s. In his 21 years in the big leagues, Evans hit 414 home runs and had a good enough eye to take 1605 bases on balls, giving him a respectable .361 lifetime OBP.

Reportedly an absolutely abysmal fielder, Jack Fournier stayed in the big leagues because he could flat hit: .313 lifetime, coupled with a .392 OBP. That makes him a player to watch in the playoff.

One of the truly great catchers, Mickey Cochrane parlayed his .320 batting average into a slot in the Hall-of-Fame and a place in the playoff.

Chris Speier played 2260 games for five different major league teams over 19 years, qualifying him for the tournament. A three-time All-Star at shortstop, his offensive statistics were “pretty good” for a shortstop in the 1970s and 80s but might not be enough to advance to the later rounds of the playoff. Time will tell.

George Case led the major leagues in stolen bases a then-record six times, totaling 349 in his eleven-year career. Coupled with his lifetime .282 batting average, it should give him a decent chance in the tournament.

Stuck behind Gil Hodges in the Dodger organization, Jim Gentile didn’t exceed his rookie status until he was 26 years old. Despite the late start, he hit 179 home runs in his seven years as a regular. He qualified for the playoff by ranking in the Offensive Winning Percentage category.

In a rather hitting depressed league where the teams combined for an anemic .199 average, Hall of Famer Goose Goslin came out on top with 95 wins. The Mickey Cochrane team led in batting with a .238 average, with the league-best, Cochrane8 at only .256.