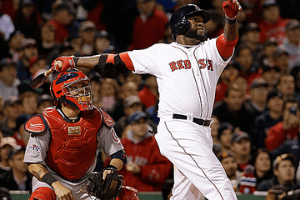 The tale on David Ortiz makes it apparent why he is the top seed in this season. “Big Papi” played for 20 years which is plenty of time to build up one’s lifetime statistics. He was really good for many of those years and was even great for a few. Although he never won an MVP, for the five seasons between 2003 and 2007 he finished fifth or higher in the voting. He had 2472 hits with 632 doubles and 541 home runs all while hitting a solid .286. With his 1319 walks, his OBP was .380 and his .552 slugging percentage gave him an OPS of .931. He was a dangerous man with a bat and retired while still productive, completely forgetting to have a decline phase. He is someone to watch in the tournament.

Is Kenny Lofton the best eligible player not on the Hall-of-Fame ballot? Maybe so. His seventeen-year career included 2428 hits for a .299 lifetime batting average and his .372 OBP was further enhanced by his 622 stolen bases. A six-time All-Star with four Gold Gloves to his credit, JAWS has Lofton rated as the 10th best centerfielder of all time, well above a number of Hall-of-Famers. The Veteran’s Committee has an easy selection when he becomes eligible in 2022.

Here’s one Hall-of-Fame selection the Veteran’s Committee absolutely got right: Orlando Cepeda. For seventeen years, Cepeda terrorized (mostly) National League pitching, clubbing 379 home runs and hitting .297. An eleven-time all-star, “The Baby Bull” also was the 1958 Rookie of the Year and picked up the MVP award in 1967.

Paul O’Neill had a solid career, splitting his seventeen years between the Cincinnati Reds and the New York Yankees. During that time he hit .288 with 281 homers and 1269 RBI. Take a look at his record; if he had played his whole career in the Bronx, he’d be in the Hall-of-Fame right now!

Although injuries often kept him out of the lineup, Lew Fonseca when healthy was a tough out. In his twelve major league seasons, Fonseca hit .316, including a league-leading .369 in 1929.

A light-hitting but quite speedy outfielder, Dave Collins stole 395 bases in his 16 big league seasons and batted .272.

Jay Buhner made it into the playoff by virtue of his 310 lifetime home runs. In fifteen years, mostly with the Seattle Mariners, Buhner hit .254 with a .494 slugging average.

Another good hitter that just couldn’t seem to stay healthy, Kevin Mitchell had a couple of monster years, including picking up the National League MVP in 1989 for the San Francisco Giants. In his thirteen seasons, Mitchell blasted 234 home runs and hit a respectable .284. It was his OPS that was his ticket into the playoff. His on-base plus slugging came in at .880.

Kenny Lofton barely led the league in batting average with .223 vs. the league’s .201 but still finished first in the standings by a comfortable margin. This season also had its share of futility for the David Ortiz and Jay Buhner teams. The Big Papi team stole 6 bases in 18 attempts and Buhner hit only .157 on the season.

Lofton and Mitchell are joined by Orlando Cepeda and Paul O’Neill in Round 3 and the rest try their luck in Round 2.