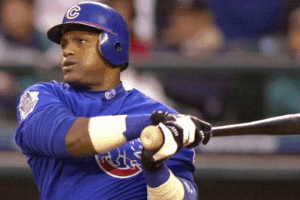 In a season that promises some fireworks, top seed Sammy Sosa takes on Hall-of-Famers Ernie Banks, Brooks Robinson, and Rabbit Maranville plus offensive threats Luis Gonzalez, Shano Collins, Miguel Tejada, and Omar Moreno. Top 4 and all over .500 advance to Round Three.

At the beginning of August, Omar Moreno was 12 games over .500. Despite his fade, he hung on for a fourth-place finish behind the big three at the top. Ernie Banks took the season with 95 victories. Tejada, Robinson, Maranville, and Collins are eliminated.