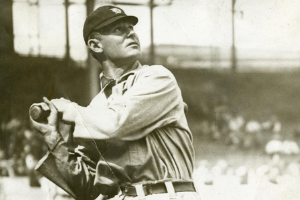 Week number four of Round Once kicks off with all-time triple leader Sam Crawford in the top seed. He will be testing himself against fellow Hall-of-Famers Harry Hooper and Dave Bancroft, as well as six other baseball luminaries: Tom Brown, Ron Fairly, Ken Singleton, Shano Collins, and Prince Fielder.

The all-time leader in triples with 309, Sam Crawford was a complete hitter. Sharing the outfield with Ty Cobb, “Wahoo Sam” – he was from Wahoo, Nebraska – totaled 2,962 hits and a .309 average over his nineteen years with the Detroit Tigers. Fun fact: He had 12 inside the park homers to go along with his 16 triples in 1901!

Harry Hooper was a solid ballplayer for a long time. Never spectacular but excellent on defense and always “pretty good.” That kind of consistency over the course of seventeen years resulted in a very good but not great set of lifetime totals: 2,466 hits, 1,429 runs, 1,136 career walks, and a lifetime .281 batting average. Good enough to be elected to the Hall-of-Famer by the Veterans Committee in 1971.

Another ballplayer who hung around long enough at a high enough level to build up the numbers to make the tournament is Tom Brown. Playing for nine different teams in the 1880s and 90s, Brown ended up with 138 triples and 658 stolen bases, both good enough to qualify.

What is this, a theme? Ron Fairly is another of those long-career types who gradually build up the kind of numbers that get noticed. Playing in 2,442 games over the course of 21 years, Fairly hit for a lifetime .266 average. I always liked the back of his baseball cards because he had played so long. To see those rows of statistics going all the way back to 1958 was fascinating to young Tim.

Ken Singleton was another of my favorites growing up. You could always count on him to hit about .290 or so with 20 HRs. He was also pretty good at taking a walk, ending his career with 1263 bases on balls which gave him a .388 on-base percentage.

Playing primarily for the Chicago Whitesox, Shano Collins had 133 lifetime triples to qualify for the tournament. We’ll have to see if that offsets his .264 batting average.

Missed it by that much! We almost had a father-son match up but Prince Fielder showed up one season late. We’ll see what happens later, but for now, his power got him in.

Let’s face it: the pitching is tough! Although there were no no-hitters, the best Crawford led the league with only .258 on the season and one of the Prince Fielders led in Homers with 22. A Ken Singleton came in second with 18.

Crawford, Fielder, and Singleton are joined by HOFer Harry Hooper in Round 3. The others take their chances in Round 2.