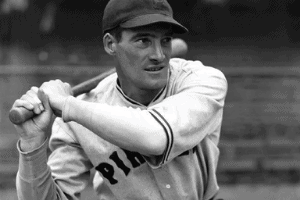 Former-Pirate Gus Suhr takes the top seed position for this season, going head-to-head against some rigorous competition in the form of speedsters Ron LeFlore, Luis Polonia, and Dave Collins, plus sluggers Joe Adcock and Troy Glaus. And let’s not forget “The Walking Man,” Eddie Yost, and one of the greatest shortstops of the 19th century, Jack Glasscock. Top 4 automatically advance to Round Three.

Joe Adcock combined a better than the league batting average with a league-leading 229 home runs to take first place (a 22-8 record in June didn’t hurt, either). Gus Suhr managed second ahead of Eddie Yost while Troy Glaus and Dave Collins tied for fourth. They all advance to Round Three as we say goodbye to Luis Polonia, Ron Leflore, and Jack Glasscock.