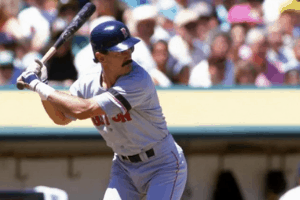 If you are looking for an adjective to describe Redsox great, Dwight Evans, you could do worse than “steady.” For twenty seasons, “Dewey” anchored the Boston outfield, winning an impressive eight Gold Gloves and being far more than adequate at the plate. His 2446 career hits gave him a .272 lifetime batting average and his 1391 walks gave him an OBP almost one hundred points higher. He connected for 483 doubles and 385 home runs, slugging .870. Despite his consistent production, Evans was named to only three All-Star teams. His non-election to the Hall-of-Fame is often cited as a glaring omission.

Another impressively consistent performer, Luis Aparicio was a great fielding shortstop who led the American League in stolen bases for nine consecutive seasons from 1956-64, totaling 506 for his career. In his eighteen-year career, Aparicio hit .262 and scored over 1300 runs. He was elected to the Hall of Fame in 1984.

“Shoeless” Joe Jackson was clearly one of the all-time great players and was on a trajectory that would have led to the Hall-of-Fame. In fact, if he was eligible, his statistics as they are, with his career lopped off at age 32, would probably be good enough for election. He hit .356 lifetime which is third on the all-time list. He hit 307 doubles and 168 triples, giving him a slugging percentage of .517 and an OPS+ of a staggering 170, good for the ninth-best career mark. His involvement (whatever it was) in the Black Sox scandal got him banned from the game in the prime of his career.

The 1985 Rookie of the Year, Vince Coleman stole over 100 bases in each of his first three seasons. By the time his thirteen-year career was over, his total had climbed to 752, good for sixth on the all-time leader board and was successful in a phenomenal 80% of his attempts. He was named to two All-Star teams but with a .264 lifetime batting average, he may find some difficulty in the playoff.

Called “The Ty Cobb of the Federal League,” Benny Kauff was pretty great for the two years of its existence, batting a combined .357 and winning both batting titles. His subsequent five years with the New York Giants were not quite as productive as his career average slipped to .311 and that’s good enough to qualify for the tournament. He was given a lifetime ban by commissioner Kennesaw Mountain Landis for dealing in stolen automobiles even though he was acquitted by a jury.

Seventeen years of steady production gave Joe Adcock a respectable .277 batting average and a total of 336 home runs back when 300 homers really meant something. A two-time All-Star, Adcock hit some spectacularly long home runs and hit four in one game.

Kid Gleason played for twenty-two seasons, long enough to become one of the National League’s better second basemen of the 1890s and to steal 329 bases and qualify for the tournament. His totals might have been higher if he hadn’t spent the first eight years of his career as a pitcher, compiling a record of 138 wins vs. 131 losses. His placement in this particular season of the tournament is interesting in that he was also the manager of Chicago “Black Sox” of 1919.

Playing for twenty-one seasons that encompassed the hitting starved 1970s, Ted Simmons was a fixture behind the plate for first, the St. Louis Cardinals, and then the Milwaukee Brewers before finishing up with the Atlanta Braves. A lifetime .285 hitter, Simmons scored over 1000 runs and drove in over 1300 while accounting for 248 home runs. While he has now been elected to the Hall of Fame, he qualified for the playoff by placing highly in Win Probability Added.

Boy was I surprised! Not by Joe Jackson, who won 23 straight in July and August and spent every single day in first place. That Jackson would win was sort of expected. But Benny Kauff also dominated in the league, picking up a robust 103 victories. Jackson led the league in team batting average with .294 vs. the league’s .214.

Jackson, Kauff, and Coleman are joined by Luis Aparicio in Round 3. The others head to Round 2.