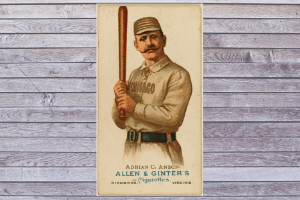 All-Time Great Cap Anson is the top seed in this season as Round One continues. He is joined by modern players Brett Butler and Jim Edmonds, as well as fellow Hall-of-Famer Bill Terry. Also taking part are Jake Stenzel, Bob Bescher, Troy Glaus, and Charlie Keller.

Baseball’s first superstar, Cap Anson was there at the start of the National Association as a nineteen-year-old in 1871. He continued on in the National League for a total of 27 years. The first batter to reach 3,000 hits, Cap finished with a .334 batting average.

I always liked Brett Butler; I think it was because he was a combination of the things I generally like in a hitter: He was fast, took quite a few walks, and played for Cleveland. I never thought he got enough credit. He finished with a .290 career batting average and stole 558 bases in a 17-year career.

In a standout seventeen-year career, Jim Edmonds cranked 393 home runs, drove in 1199 runs, and hit for a .284 average while drawing 998 walks. Good with the glove – he picked up eight Gold Gloves in centerfield – and a four-time All-Star with California and St. Louis, he was, in short, very productive.

In the first Strat-o-matic league I played in, I had Bill Terry and his 1930 card. He hit an astounding .401, the last National Leaguer to achieve that feat. For me, he was hitting almost .500 before a 20-injury of 15 games which he followed up with another 20-injury in his first game back. Sigh. The real Bill Terry hit .341 lifetime.

Before the turn of the last century, in a nine-year career with only six as a regular, Jake Stenzel batted .338 and averaged about 60 stolen bases. It was a short, intense career but take these numbers with a grain of salt: The league average hovered around .300 during those years. We’ll see how he does.

Bob Bescher was a dead-ball era hitter who made it into the tournament by virtue of his 428 lifetime steals. He led the league in stolen bases from 1909-1912 while with Cincinnati. He also had some fairly decent walk totals, making those stolen bases even more valuable. Only a .258 lifetime average, though.

320 is a lot of home runs and that is why Troy Glaus made the tournament. He was also capable of taking a walk, which may benefit him in this contest.

Charlie Keller made the tournament because his On-base Plus Slugging landed him amongst the all-time leaders. World War II stole his age-27 season and part of another.

A three-way race ended with Jake Stenzel taking the crown on the last day of the season, slipping by Charlie Keller. True to form, the hitter hit. Bill Terry’s .253 led the league, with Stenzel clocking in at .249 vs the league’s .215.

There was a 13 – 0 shellacking by Bill Terry over Troy Glaus and in one game a Troy Glaus went 6 for 8 in a 19-inning game. The Glaus team was also the victim of the only no-hitter on the season, tossed by Brett Butler’s Roger Clemens. It must have been a long year for the Glaus faithful.

Stenzel and Terry are joined by league home run leader Charlie Keller and Cap Anson in Round 3. The others head to Round 2 for a second chance.