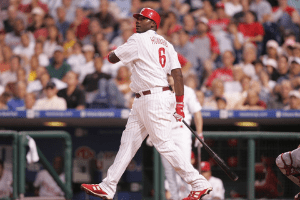 Ryan Howard has the top seed for this season and will see what he can do against Bob Fothergill, Hal Chase, Garry Templeton, Lee May, Johnny Moore, Aramis Ramirez, and Hall of Famer Charlie Comiskey. Only the top four finishers are guaranteed to continue on to Round Three.

Despite hitting below the league average, Ryan Howard parlayed a significant number of walks and prodigious power numbers to notch 99 wins and a first-place finish. Lee May was second in HRs and finished second on the season. Garry Templeton and Hal Chase also qualified for Round Three. Although leading the league in batting average, Bob Fothergill failed to advance, as did Johnny Moore, Aramis Ramirez, and Charlie Comiskey.