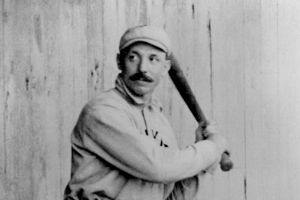 An above-average fielding shortstop, George Davis is in the category of “really good for a really long time.” The only offensive category he led his league in was RBIs with 135 in 1897 but in his twenty seasons he racked up some impressive career statistics.  He played in 2372 games, scoring 1545 runs on 2665 hits. He had 453 doubles and 163 triples, enabling him to rack up 1440 RBIs. Lifetime, he hit .295 with 619 stolen bases. His placement on the leader boards induced the Veteran’s Committee to install him into the Hall-of-Fame in 1998. It also gave him enough points to be the top seed for this season.

Even though he is possibly most famous for his “Mad Dash” against the Boston Redsox in the 1946 World Series (scoring from first on a gapper to left-centerfield). Enos Slaughter was a substantial offensive threat during his nineteen big league seasons. Even with three prime years spent in the military during World War II, Slaughter still managed 2383 hits and a .300 average. Over 1000 walks boosted his OBP to .382 and he also tallied 413 doubles and 148 triples, giving him a healthy .453 slugging percentage. The Veteran’s Committee selected him for the Hall-of-Fame in 1985.

Arlie Latham was known as “The Freshest Man on Earth” because of his antics on and off the field. In his thirteen seasons as a regular, he stole 742 bases and scored 1481 runs to qualify for the playoff. He is possibly the worst fielding third baseman in history (822 errors – 200 more than second-place!) but was also the first full-time third base coach and the oldest man to ever steal a base, which he did at age 49 while playing a few games for the New York Giants as a semi-comedic act.

A three-time All-Star, Lee May made the tournament by being a prolific slugger. His 354 career home runs and 1244 RBIs were pretty good for his era. He also batted .267 during his eighteen-years in the majors.

A damn good ballplayer for most of the decade immediately following World War II, Dale Mitchell hit for a .312 average, mostly for the Cleveland Indians. He also had more than a few triples – 61 in 4358 at-bats.

Del Ennis earned his slot in the playoff by driving in 1284 runs in his fourteen-year career, mostly with the Philadelphia Phillies. A three-time all-star, he hit .284 with 288 home runs, boosting his slugging average to .472.

Fred Lynn exploded onto the baseball scene in 1975. The previous fall, he had shown what he was capable, hitting .419 in 15 games with the Boston Redsox but his Rookie Season was something special. He hit .331 with 21 home runs and 105 RBIs, leading the Sox to the World Series and becoming the first player to win the Rookie of the Year and MVP awards in the same year. His seventeen-year career netted him 306 home runs and a .283 batting average, along with nine All-Star games and four Gold Gloves.

A slick-fielding shortstop for the New York Yankees, Phil Rizzuto was selected for the Hall-of-Fame by the Veteran’s Committee in 1994 and if he was good enough for them, he’s good enough for me. He missed three peak years to World War II but still batted .273 and picked up an MVP award in 1950. I do not hold high hopes for him in the playoff as his value was largely defensive and this is an offensive competition.

With seven games to go in the season, Country Slaughter was only one game back of Dale Mitchell, but Mitchell reeled off seven straight and Slaughter dropped his seven, leaving Mitchell with a sizable victory. They were also 1-2 in batting average, Mitchell with .254 and Slaughter with .232 vs. the league’s .209.

Mitchell and Slaughter are joined by George Davis, Del Ennis, and Fred Lynn in Round 3. The others head to Round 2.