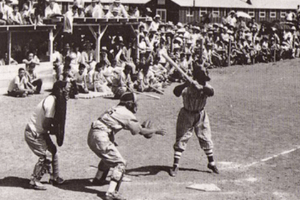 Top seed Jimmy Dykes faces fellow Philadelphia Athletic (they missed being teammates by a year) Stuffy McInnis and an assortment of players from baseball history: David Ortiz, Toby Harrah, Phil Rizzuto, Richie Sexson, Bobby Grich, and Bill Kuehne. Top 4 finishers advance, as does anyone with a .500 or better record.

David Ortiz had a 49-12 stretch in June and July which propelled him to a 100 victory season and first place. Stuffy McInnis led all teams in batting average and finished up with a 7-3 record over the last 10 games to make it to a .500 record and qualify out of fifth place. Bobby Grich, Richie Sexson, and Toby Harrah also advance to Round Three. Jimmy Dykes, Phil “Scooter” Rizzuto, and Bill Kuehne are all done.

No Hitters
5/ 9 Bob Gibson4 of Bill Kuehne vs. Jimmy Dykes in 9 innings

With the score tied in the 9th inning, Dykes5 hit a tapper back to the mound, which Gibson4 bobbled, allowing him to reach on the error. Dykes4 followed next, laying down a sacrifice bunt.&nbsp; Dykes5 advanced to third on a fly ball to deep center field. Gibson4 then threw a wild, scoring the run. He was the hard-luck loser, 1-0.

5/28 Walter Johnson6 of Toby Harrah vs. David Ortiz in 9 innings
8/23 Pete Alexander1 of Bobby Grich vs. Phil Rizzuto in 9 innings&nbsp;