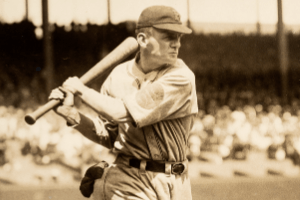 Top seed Max Carey is our only Hall-of-Famer this season and he faces some stiff competition from fellow triple makers Jimmy Sheckard, Bill Kuehne, and Duff Cooley. They also face the raw power of Juan Gonzalez and Matt Holliday and the batting prowess of Freddy Leach, not to mention special invitee Oscar Gamble

Max Carey hit .285 during his 20-year career starring for the Pittsburgh Pirates for most of it and finishing up with the Brooklyn Robins after being traded due to some clubhouse drama. He was excellent at getting on base, collecting 2665 hits, including 419 doubles and 159 triples, and drawing over 1000 bases on balls which boosted his on-base percentage to .361. Once on base, he was even more dangerous, leading the National League in stolen bases ten times, finishing with 738 steals, a National League record that stood until Lou Brock broke it in 1974. In fact, it is still the 9th-highest total in major league history. Carey was elected to the Hall of Fame in 1961.

One of the most feared sluggers of the 1990s, Juan González hit 434 homers and drove in 1404 runs while batting .295 in his injury-shortened seventeen-year career. He smacked over 40 home runs in five different seasons and tallied at least 100 RBIs eight times, picking up two MVP awards. His .904 OPS is good for 60th on the all-time list. He has a shot at the Hall-of-Fame someday when he is eligible for the Veteran’s Committee vote.

A seven-time All-Star, Matt Holliday ended his career with 316 home runs and a .299 batting average. His 468 doubles and 802 walks gave him a healthy career on-base plus slugging of .889 for his fifteen-years in the Major Leagues. Another borderline case for the Hall-of-Fame, we’ll have to wait until 2025 to see how he does.

An unheralded player from the 1920s and 30s, Freddy Leach roamed the outfield for the Philadelphia Phillies, New York Giants, and Boston Braves, stroking the old horsehide for a .307 average in his ten seasons, which qualified him for the tournament.

Born in Leipzig, Germany, Bill Kuehne played major league ball for 10 seasons, primarily in the 1880s. A statistical oddball, Kuehne only hit .232 for his career but of his 993 hits, 115 were triples, good enough to qualify him for the playoff. I do not hold out high hopes for his chances here.

Another old-timer with the ability to hit triples, Duff Cooley played thirteen seasons around the turn of the nineteenth century, totaling 102 three-baggers to just qualify for the playoff. Unlike Kuehne, Cooley could also hit a little, stroking the ball for a .294 average and hitting over .300 five times.

My first playoff invitee, Oscar Gamble does not have the statistics to qualify him for the tournament but he was one of my favorite players as a boy. He was what passed for a star for the early 70s Cleveland Indians and had a spectacular afro – 9 inches if I recall correctly. And he could hit! Lifetime .265 with 200 home runs at a time when 36 could lead the league and 20 was considered “power.” He had a long, seventeen-year career with a respectable .811 OPS. My fingers are crossed that he does well.

Matt Holiday joined the elite 100-win club, finishing atop what was supposed to be the penultimate first-round season matchup. He was helped in no small part by a 17-4 record in extra-inning games. Holiday batted .235 as a team while the league hit .204.

Holiday and Sheckard are joined by Oscar Gamble (Yay!) and Juan Gonzalez in Round 3. The others head to Round 2.