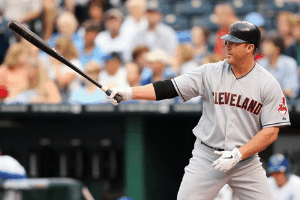 One of the great sluggers in major league history, Jim Thome also had a good eye and great patience. On his way to hitting 612 home runs and .554 slugging percentage, he also managed to put up a terrific .402 OBP. Among the leaders in many offensive categories, he is a well-deserving Hall-of-Famer.

“Sliding” Billy Hamilton earned his nickname in the late 1800s. He stole 914 bases in his 14-year career, a record he held until it was broken by Lou Brock in 1978. He also batted a robust .344 lifetime, good enough for seventh on the all-time leader board, tied with Ted Williams. He also retired as the all-time leader in walks, which boosted his OBP to an astounding .455, good for fourth place all-time. Additionally, along with Harry Stovey and George Gore, Hamilton is one of three batters who scored more runs than games played. He is someone to watch in the playoff.

I’m going to be open here; Julio Franco is one of my favorite players. I liked him when he joined the Cleveland Indians in 1983 as a 24-year old shortstop (although I was skeptical about losing Von Hayes – shows what I know) and I liked him in 2007 when he was winding up his career as the oldest everyday player in baseball. And then he went and played a couple more years in Japan and Korea, where he is now the hitting coach for a farm team of the Lotte Giants. Along the way, he stroked 2586 hits for a .298 average. Best of all, he might just try to make an MLB comeback over the age of 60!

Alan Trammell was very good for a very long time. Teaming up with Lou Whitaker around the Detroit keystone sack, he was the very definition of stability in the Tiger infield. In his 20-year career, he hit .285 with over 400 doubles and was selected for the Hall-of-Fame by the Veterans Committee in 2018.

Another favorite of mine is Ken Williams. Getting a late start at age 29 due in part to WWI and having his career cut short due to an outfield collision, he retired with a .319 lifetime batting average. He was also the first 30-30 man, leading the American League with 39 home runs and stealing 37 bases for the 1922 St. Louis Browns. As a bonus, he also knocked in 155 runs. I had his strat card on one of my teams… love that power and speed combination. I hope he does well in the tournament.

Known primarily as a good fielding second baseman, Bobby Grich hit .266 in his seventeen years with the Baltimore Orioles and California Angels. He qualified for the playoff based on his 1087 walks, which boosted his OBP to .371.

Chicken Wolf played eleven years, primarily with the Louisville Colonels of the American Association. He hit .290 lifetime and qualified for the tournament based on his 109 triples.

Joe Gordon, who picked up the inevitable nickname of “Flash,” was a hard-hitting, slick-fielding second baseman. Two prime years lost in the service during World War II probably cost him 300 career home runs as well as the opportunity to pad his 9 All-Star game appearances – he was selected in all but his rookie and final years. He qualified for the tournament based on his Hall-of-Fame selection in 2009.

Sliding Billy Hamilton won this one handily, leading in Batting Average with .253 vs. the league’s .210 and outclassing the field in Stolen Bases, nearly eclipsing the total of the other teams combined. One Hamilton batted .303 for the season. Sadly, Julio got handed his hat.

Not much in the way of highlights this season. Alan Trammell5 had a 20-game hitting streak and there were 4 no-hitters: two each by different Cy Youngs and Tom Seavers. One of the Cy’s was perfect.

Hamilton is joined by Ken Williams, Joe Gordon, and Jim Thome in Round 3 as three of the four Hall-of-Famers made the cut. It’s off to Round 2 for the others.