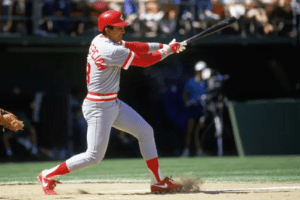 No Hall-of-Famers in this season but some darn good ballplayers! Dave Concepcion leads the way as the top seed facing way-old-timers Darby O’Brien, Lave Cross, and Tommy Corcoran, plus Tom Goodwin, Jason Giambi, Freddy Leach, and Steve Finley. In order to advance, teams must have a .500 record or finish in the top 4.

Jason Giambi’s home run power gave him the winning margin in Season 18, clouting 203 round-trippers. Steve Finley, Darby O’Brien, Dave Concepcion, and Freddy Leach join him in qualifying for Round Three, all of them finishing with better than .500 records. Tom Goodwin, Lave Cross, and Tommy Corcoran hang up their spikes.