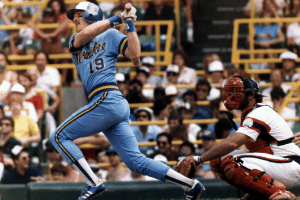 Robin Yount is the top seed in this season, and for good reason. He was very good for a very long time. He played in 2856 games in his twenty seasons, collecting 3142 hits for a .285 batting average. Among his hits were 583 doubles, 126 three-baggers, and 251 home runs, leaving him with a .430 slugging percentage. A three-time All-Star and two-time MVP, he even picked up a Gold Glove on his way to Cooperstown.

A fixture at second base in Cincinnati for two decades, Bid McPhee put in time with the Red Stockings of the American Association and the Reds of the National League, where he was considered the best second baseman in baseball. The record books say he stole 568 bases but those stats should be taken with a grain of salt – for his first four years no records were kept and for a few years, a batter was credited with a stolen base for advancing an extra base on a single, ground out, or fly ball. In any case, he scored over 1600 runs and drove in another 1000, hitting 189 triples and batting .272 in his eighteen seasons. He was voted into the Hall-of-Fame by the Veteran’s Committee in 2000.

The shortstop for “The Big Red Machine,” Dave Concepcion was a great fielder who could also hit a bit, collecting 2326 for a .267 average in his nineteen seasons in Cincinnati. A nine-time All-Star and five-time Gold Glover, Concepcion also scored and drove in almost 1000 runs and managed to steal 321 bases.

Another middle infielder, Fred Pfeffer played second base for sixteen seasons at the end of the nineteenth century. He stole 383 bases – again remember, incomplete data – and raced to 130 triples, batting .256. He also scored and knocked in over 1000 runs.

Bug Holliday put in ten years but was never the same after his sixth, having suffered from appendicitis. He never completely recovered from the surgery and was reduced to part-time play for his last four years. A lifetime .312 hitter, he retired at age 31 in 1898.

Jim “Junior” Gilliam played fourteen seasons for the Dodgers both in Brooklyn and Los Angeles, hitting .265. However, his 1036 walks qualified him for the tournament and raised his on-base percentage to a reasonable .360. The Rookie of the Year in 1953, he also was named to two All-Star teams.

Reggie Sanders became the fifth player to join the 300 homer – 300 stolen base club in 2006, ending his seventeen-year career with 305 and 304. He scored over 1000 runs and knocked in almost as many and finished with a lifetime batting average clocking in at .267.

My doppelganger (a catcher who could play any position, steal bases, and parted his hair in the middle – don’t judge me, it was the early 80s…), Roger Bresnahan is mostly known as the inventor of catcher’s shin guards and this sometimes causes his inclusion in the Hall-of-Fame to be questioned. His fifteen years as a full-time player did not seem to produce the offensive statistics usually required to make it to Cooperstown. His lifetime average was .279 and he is on the low end of HOFers. But remember, catcher was a much more important position during his era and Bresnahan was one of the biggest stars in baseball.

Hall-of-Famer Roger Bresnahan made the case for why he’s in Baseball’s Greatest Player Playoff, finishing the season on a 7-3 spurt to secure first place. Last place Fred Pfeffer finished on an 11-game losing streak, which nearly matched the 12-game one he had earlier in the season.

Robin Yount led in batting average with .213 and the league as a whole only hit a paltry .196. One Pfeffer only hit .132. Not surprisingly, there were 5 no-hitters.

Brez and Yount are joined by Bug Holliday, Bid McPhee, and Reggie Sanders who qualified with a positive run differential in Round 3. The rest head to Round 2.