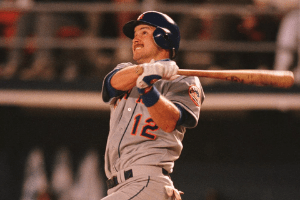 Jeff Kent comes into this season as the top seed but will have his work cut out for him if he hopes to advance to Round Three. Hall-of-Famers Ned Hanlon, Tommy McCarthy, Ken Griffey Jr., stand in his way as do George Wood, Rusty Staub, Jose Bautista, and Jim Fogarty. It will take a top 4 finish or a record of at least .500 to move ahead in the playoff.

Ken Griffey Jr.and Rusty Staub went into the final series of the season tied for first with 90 wins apiece. When the dust settled, Junior sat atop the league. He and Staub will be joined in Round Three by Jose Bautista and George Wood. Jeff Kent, Jim Fogarty, Tommy McCarthy, and Ned Hanlon are all done in the tournament.