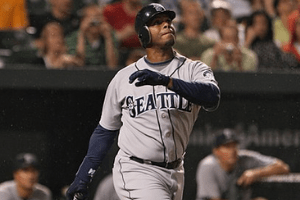 There’s not much to say that hasn’t already been said about Ken Griffey Jr. “The Kid” was a five-tool player with an impeccable pedigree and was drafted as a 17-year-old high schooler as the first pick of the 1987 draft. In two years he was in the big leagues. Thereafter followed ten of the most productive consecutive years of hitting and he seemed destined to rewrite the record books. A host of injuries then plagued him through the end of his career but he still managed an impressive 2,781 hits and 630 home runs. He was a 13-time All-Star and picked up 10 Gold Gloves and an MVP Award. Griffey was elected to the Hall-of-Fame on his first try in 2016. For all you Derek Jeter fans, 3 voters left him off their ballot.

Dan Brouthers was arguably the greatest slugger of the nineteenth century, leading or among the leaders in nearly every offensive category for over a decade. He finished with 2203 lifetime hits for a batting average of .342. He also slugged .520, which was the high-water mark until a fellow name Cobb surpassed him in 1922.

In his 16-year career with the Boston Redsox, Jim Rice was a model of consistency with occasional seasons of greatness. His 1978 MVP season was one of the most productive of the 1970s, leading in almost every offensive category and just missing the Triple Crown, finishing 3rd in batting average. Lifetime, Rice stroked at a .298 clip and smashed 382 round-trippers.

Chick Stahl had a .305 batting average, 1546 hits, and 118 triples in a ten-year career split between the American and National League teams in Boston around the turn of the 20th-Century. He’d be more well-known if his career hadn’t ended tragically in suicide. It’s a good story.

Curt Welch stole a bunch of bases in the old American Association in the 1880s. His lifetime total of 453 was likely higher due to incomplete data during his first two years in organized ball.

A fixture at third base for the Chicago Cubs for more than a decade, Stan Hack hit .301 while collecting 2193 hits. Combined with his 1092 walks, he achieved a .394 on-base percentage. He may do well in the playoff.

I lived in the Cincinnati area for a while and became a fan of the reds and Eric Davis. He could hit the long ball and steal a base; my two favorite attributes for a hitter. A victim of injuries, he always seemed destined to be even better than he was. I probably would have included him in the tournament as an invitee but in the end, it was his 349 stolen bases that qualified him on his own merits.

The 2006 National League Rookie of the Year, Hanley Ramirez has managed 271 home runs and a .289 batting average in his 15-year career. He qualified for the tournament for his OPS.

Hanley Ramirez went 8-2 down the final stretch to sneak ahead of Stan Hack for second place but Dan Brouthers finished on top, leading in average with .248 vs. the league’s .210. It was a mostly disappointing finish for the players of my fandom as Davis, Rice, and Griffey brought up the rear.

In one game, the Hack team crushed Chick Stahl 15 – 1 and in another, Brouthers managed 21 hits. There were two no-hitters and in one of them, Cy Young, by virtue of double plays and a pickoff, only had 24 opposing at-bats!

Brouthers, Ramirez, Hack, and Stahl head to Round 3. The others are off to Round 2 for a second chance in the consolation round.