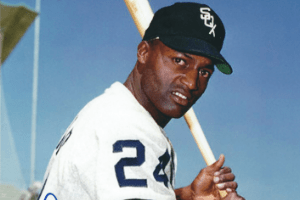 Accidentally in the tournament, Don Buford tries to stay in against Hall-of-Famer Ernie Lombardi, maybe-someday Hall-of-Famers Dwight Evans and Don Mattingly, Mariner Jay Buhner, and old-timers Les Mann, Fred Tenney, and Fred Pfeffer. They have to finish in the top 4 or with a record over .500 to make it through to Round Three.

Ernie Lombardi and Don Buford (!) were neck-and-neck heading down the stretch but “Schnozz” turned it on, going 9-1 to close out the season, finishing in first place, 6 games ahead. Mattingly and Buhner round out the top 4, each qualifying for Round 3. Despite having a positive run differential, Dwight Evans finished in 6th in no small part due to his 18-32 record in 1-run games. He and Fred Tenney, Les Mann, and Fred Pfeffer will be heading home.