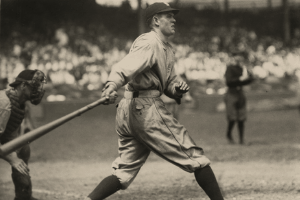 Tiger old-timer Lu Blue has the top seed in this season and will be facing some tough competition trying to keep their hopes alive in the playoff. Blue had his final big league at-bat for Brooklyn and will be facing a slew of ex-Dodgers/Robins/Bridegrooms: Jim Wynn, Ron Fairly, Davey Lopes, Dave Bancroft, and Tommy Tucker as well as sluggers Jose Canseco and Ron Gant.

Jim Wynn took this season rather easily, finishing 9 games ahead of the pack while Ron Gant ended on an 8 and 2 tear to climb into fourth place, beating out Ron Fairly and Dave Bancroft for a coveted spot in Round Three. Also qualifying were Jose Canseco and Davey Lopes and we also bid farewell to Lu Blue and Tommy Tucker.