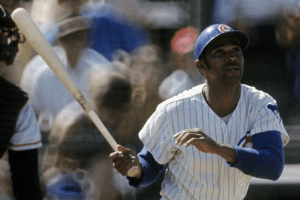 Ernie Banks got all the press, but Billy Williams was his formidable partner in the Chicago Cubs lineup. Williams played 14 seasons for the Cubs and 2 seasons for the Oakland Athletics. During that offensively deprived time, he batted a robust .290, slugged 426 home runs, and scored and drove in over 1400 runs. The National League Rookie of the Year in 1961, Williams was a six-time All-Star and was inducted into the National Baseball Hall of Fame in 1987.

“Big Sam” Thompson‘s manager called him “the greatest natural hitter of all time” and his statistics lend credence to that assessment. Although his career encompassed 15 major league seasons, he was a regular for the decade-plus between 1885 and 1896. All told, Thompson compiled a .331 batting average while being a legitimate power hitter. Of his 1988 hits, 343 were doubles, 161 were triples, and 126 were home runs giving him a lifetime OPS of .890. He also drove in 1305 RBIs, and stole 232 bases. He was elected to the Hall of Fame by the Veteran’s Committee in 1974.

I’m not going to get into the controversy surrounding Jose Canseco and his seventeen-year career. Suffice to say, if things were other than they were – injuries and steroids – he would probably be in the Hall-of-Fame. As it is, he hit .266 with a .515 slugging percentage while bashing 462 home runs and driving in 1407 runs. The 1986 Rookie of the Year and 1988 American League MVP when he became the first 40-40 man – 42 homers and 40 stolen bases, Canseco was named to six All-Star teams.

In seventeen big league seasons, over half of them in two stints with the Philadelphia Athletics, Wally Moses scored 1124 runs and drove 110 triples, good enough to qualify him for the playoff. He batted .291 and collected more than 2000 hits.

The only catcher to win three batting titles, Joe Mauer was also pretty handy behind the plate, picking up three Gold Gloves as well. A lifetime .306 hitter over his fifteen years with the Minnesota Twins, Mauer also came close to qualifying with his 1018 runs scored, 428 doubles, 923 RBIs, and 939 bases on balls. Since he was a good fielding catcher, his hitting should get him into the Hall-of-Fame when he is eligible.

A first-round draft pick out of high school, Lonnie Smith made it to the Philadelphia Phillies major league roster as a 22-year-old. He stole 370 bases in his seventeen-year career which qualified him for the tournament. He was a .288 lifetime hitter and topped .300 in a half-dozen seasons.

Kent Hrbek was born in Minneapolis, grew up in the area, and played his entire fourteen-year major league career with the Minnesota Twins – a true hometown hero. An all-star as a rookie, he batted .288 lifetime and slugged 293 home runs which just qualified him for the playoff.

Elected to the Hall of Fame by the Veteran’s Committee in 1982, Travis Jackson was considered by many to be the best shortstop of his era, playing fifteen seasons with the New York Giants and combining excellent defense with good but not great offense. His lifetime batting average was .291.

19th century slugger and Hall-of-Famer, Sam Thompson caught fire in June and stayed hot the rest of the way to take the season. The Thompson team hit .247 vs. the league’s .210.

Thompson is joined by the other over .500 finishers Billy Williams, Joe Mauer, Kent Hrbek, and Lonnie Smith in Round 3. The others head to Round 2 for a second chance.