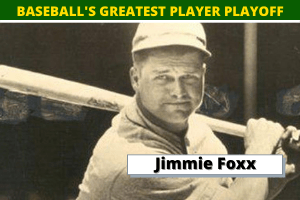 Hall of Famer Jimmie Foxx brings his power and average up against the former Home Run King, Gavvy Cravath, what might have been Pete Reiser, and underrated power hitter Del Ennis. Rounding out the league is Jacoby Ellsbury, George H. Burns, Dave Collins, and back-from-the-minors Don Buford. A top 4 finish means a guaranteed spot in Round 5.

Jimmy Foxx just crushed it. He led the rest of the league in batting by over 20 points, had almost twice the average runs, and his 427 home runs were the third highest team season home run total, behind Babe Ruth‘s 537 and Lou Gehrig‘s 442. Only third place Pete Reiser managed a .500 record against him. Gavvy Cravath took second while Del Ennis and accidental participant Don Buford tied for fourth. Ellsbury, Burns, and Collins will get a second crack at advancement in Round 4.