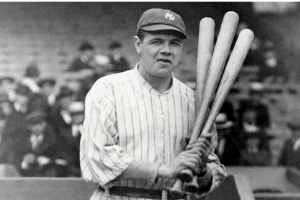 Based on the number of Round One victories, Babe Ruth has the top seed in the season. He will have to get by Hall-of-Famers Bill Terry and Max Carey as well as Dodger great Steve Sax, scion of the Alou Family, Moises Alou, Gary Matthews, Jose Cardenal, and Greg Luzinski. Top four or over .500 automatically advance to Round 5.

The boys in the press box had a field day!

The Great Bambino, Bam, The Bulby Bambino
The Big Fellow, The Big Bam
The Colossus of Clout, The Colossus of Crash
The King of Crash, The King of Clout, The King of Swing
The Caliph of Clout
The Behemoth of Bust
The Wazir of Wham
The Maharajah of Mash
The Rajah of Rap
The Blunderbuss
The Mammoth of Maul
The Mauling Mastodon, The Mauling Monarch, The Mauling Menace
The Wali of Wallop
The Prince of Powders, The Prince of Pounders
The Terrible Titan, The Titan of Terror
The Kid of Crash
The Sachem of Slug
The Wizard of Whack
Herman the Great

Babe Ruth followed up his 130 wins in Round One with an additional 135 here in Round 3, crushing the competition. Second place Bill Terry had 97 victories of his own but still finished 38 games back and last place Steve Sax, who did not win a game vs. Ruth, was 93 games out of first place. Moises Alou and Greg Luzinski tied for fourth. The bottom four finishers will get a second chance in Round 4.