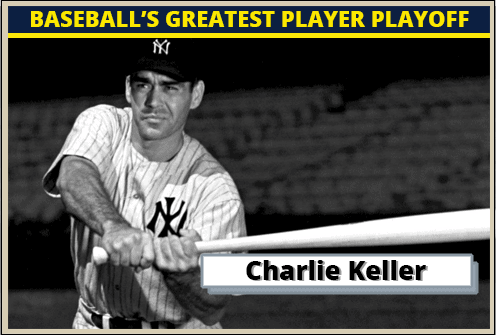 Charlie Keller is ranked number one in this season and tries to repeat his Round One success. There are no Hall-of-Famers but some very solid all-around hitters in Jose Cruz, Juan Pierre, Bill Bruton, and Josh Hamilton plus .311 lifetime Bing Miller and 19th century stolen base specialists, John Anderson and Walt Wilmot. Who moves on and who doesn’t? 154 games will tell the tale.

This sounds vaguely familiar… Charlie Keller proved his 97 first-round victories were no fluke, totting up an impressive 108 this season, dominating the league in team home runs. Cruz, Miller, and Bruton round out the top four finishers and qualify for automatic seeding in Round 5. Despite leading in team stolen bases by a large margin, Juan Pierre just couldn’t put enough into the “W” column. Josh Hamilton had a positive run differential, so he may get into Round 5 as well. We will have to see how things shake out. In any event, he and the others will get a second chance in Round 4.