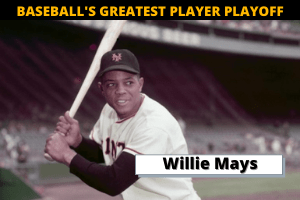 Major League legend Willie Mays faces seven tough hitters including fellow Hall-of-Famers Ralph Kiner and Tony Perez in Round 3 action. Also in the mix are Chase Utley, Keith Hernandez, Earl Torgeson, Topsy Hartsel, and Luis Gonzalez. Despite what happened in S20, only the top 4 finishers are guaranteed a place in Round 5.

Willie Mays came out on top in an otherwise evenly matched season. Ralph Kiner’s power earned him second place, followed by Chase Utley and dead ball era Topsy Hartsell. On the final day of the season, Earl Torgeson defeated Chase Utley 11-4, giving Torgeson a run differential of +2 for the season and a very real possibility of moving ahead to Round 5 despite his 6th place tie with Tony Perez. It will depend on the number of positions needed to make complete seasons in the Round 4 second chance.