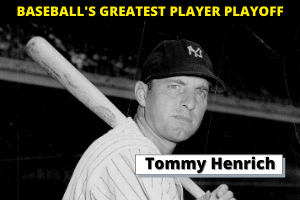 Tommy Henrich is our top seed on the strength of his 103 Round 1 S63 victories. He faces Hall-of-Famers Hank Aaron, Hughie Jennings, and Eddie Murray as well as fellow Yankee Paul O’Neill. He also will have to get past Johnny Frederick and invitees Luke Easter and Manny Mota. Only a top 4 finish guarantees a slot in Round 5.

What a barn-burner! Hank Aaron surged to first out of the number two seed and we nearly had a 4-way tie for 4th place as Luke Easter lost on the final day of the season. As it was, Eddie Murray, Manny Mota, and Paul O’Neill finished in a dead heat thanks to O’Neill’s last game victory and Mota’s sweep of Murray in the final series. Easter and Jennings head to Round 4 as the others all move on to Round 5.