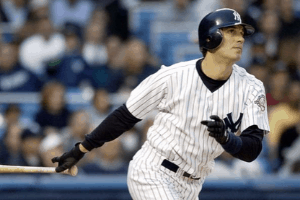 And we have arrived at the 75th and final season of Round One. Our top seed is White Sox great Robin Ventura who will be facing Jeff Heath, sluggers Nelson Cruz and Bo Jackson, Bob Nieman, Dom DiMaggio, Cecil Cooper, and the ground-breaking Curt Flood.

Robin Ventura had a pretty solid sixteen-year career in which he hit 294 home runs with 1182 RBI and a .267 average. He also drew 1075 bases on balls which boosted his on-base percentage to a heady .444. A two-time All-Star and Gold Glove winner at third base, Ventura hit 18 career grand slams.

The career of Jeff Heath is a bit of an enigma. In his fourteen big league seasons, he hit over .300 five times and .340 or better twice. In 1938 he nearly became the first American Leaguer to have 20 or more doubles, triples, and home runs in the same season. Three years later he accomplished this feat. Yet, lifetime, Heath hit only .293 with a .509 slugging percentage, due in no small part to his 102 triples. His career was cut short by a severely broken ankle.

A six-time All-Star, Nelson Cruz had been crushing baseballs with regularity over his fifteen-year career. He currently stands at 401 in that statistical category and couples that with a .277 batting average. His OPS+ got my attention, so he is a welcome addition to the playoff.

Bob Nieman played four seasons with the Baltimore Orioles and spread the rest of his twelve-year career around the majors as a platoon outfielder and pinch hitter for the Browns, Tigers, White Sox, Cardinals, Indians, and Giants. Nieman hit .295 with a .373 on-base percentage, and .474 slugging average, leaving him with a noteworthy career OPS+ of 132 which is what qualified him for the tournament.

In his seventeen-season career, Cecil Cooper posted a .298 batting average, rapping out 2192 hits including 415 doubles and 241 home runs and scored over 1000 runs – all totals that nearly qualified him for the tournament on his own merits. But whether it was because I liked him as a ballplayer or because I have a weird fascination for alliterative names, he received an invite into the playoff.

A spectacular two-sport star, Bo Jackson was the first All-Star in two major league sports, named to the American League All-Star Team in 1989 and the NFL ProBowl in 1990-91. Injuries derailed his both his football and baseball careers but not before he hit 141 home runs in his eight big-league seasons.

Dom DiMaggio might not have been “Better than his brother Joe” but he was a seven-time All-Star centerfielder for the Boston Redsox and probably would have had three more if not for the intervention of World War II right at the peak of his career. A lifetime .298 hitter, he also had 308 doubles in what really amounted to ten seasons.

The man who made free agency possible, Curt Flood was a three-time All-Star and seven-time Gold Glove-winning centerfielder for the St Louis Cardinals from 1958-1969. He hit .293 over his fifteen-year career and I felt like he deserved a shot after basically shooting his baseball career in the foot.

Jeff Heath dominated, joining the century club, and top seed Robin Ventura finished in the basement in this final Round One season. The Heath team led in batting average with a .264 mark while the league batted .239 as a whole.