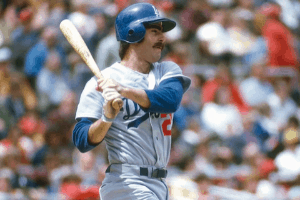 As we speed toward the end of Round One, top seed Bill Buckner has his work cut out for him. He faces Hall-of-Famer Tony Lazzeri, a young Christian Yelich, World War II home run champ Bill Nicholson, slugger Ted Kluszewski and a slew of ex-Indians: Rico Carty, George Hendrick, and Joe Charboneau.

It is unfortunate that Bill Buckner is mostly remembered for one ground ball. He had a long twenty-two-year career where he was a consistent, solid first baseman. And twenty-two years is long enough to pile up some significant offensive statistics. Buckner managed 2715 hits, 498 of which were doubles and batted over .300 seven times, giving him a lifetime .289 average. He had three seasons with over 100 RBIs for a total of 1208. Never striking out more than 39 times in a season, he finished with the fifth-lowest strikeout rate among players whose careers began after 1950.

New York Yankee Hall-of-Famer Tony Lazzeri was a home run hitting second baseman at a time when trying to hit home runs was still a newish idea. In his fourteen seasons, he clouted 178 of them while maintaining a batting average of .292. His slugging percentage of .467 left him with an OPS of .846.

A current star and former MVP for the Milwaukee Brewers, Christian Yelich came up with the Miami Marlins in 2013 which is only going to give him his first three years of statistics to go on. His last two seasons with Milwaukee have been nothing short of spectacular, averaging .327 with a .631 slugging percentage and 40 home runs. At 27 years old, he is just reaching his prime and seems destined for Cooperstown. He is in the tournament based on his OPS+ ranking.

Bill Nicholson gets an unfair rap for his power numbers because his big seasons came during World War II. Rejected from the service because of color blindness, Nicholson led the National League in home runs and RBI in 1943 and 1944 and totaled 235 homers in his sixteen-year career while carrying a .262 batting average. He is here because of his ranking in OPS+.

I was heartbroken when the Cleveland Indians left Rico Carty unprotected in the 1976 expansion draft and he was selected by the Toronto BlueJays. Apparently, I was not alone in my feelings as the Tribe immediately made a trade to get him back. A lifetime .299 hitter over fifteen injury and illness marked seasons, Carty also slugged 204 home runs. I would have included him because he is one of my all-time faves, but “The Beeg Mon” also had a high enough place in the OPS+ rankings.

Wearing the Cincinnati Reds uniform top without the undershirt was badass enough for Ted Kluszewski to get an invite to the playoff. But he was a damned good hitter too. In a fifteen-year career, he hit .298 with 279 home runs and 1028 RBIs and was a four-time All-Star.

He played for six different Major League teams but George Hendrick will always be a Cleveland Indian in my heart. Hendrick slugged 267 career home runs and batted .278 in his eighteen seasons and was named to the All-Star Team four times.

The Rookie of the Year in 1980, Joe Charboneau might be just the thing to have saved baseball in Cleveland. He brought excitement and pizzazz and not a little quirkiness to a franchise that could not seem to find its way. Unfortunately, injuries ended his career almost before it got started. His career numbers would have been a pretty solid season for 1980: 29 home runs, 114 RBI and a .266 batting average.

Tony Lazzeri, helped in no small part by a 23-8 August, took first place in a very tightly contested season. The Ted Kluszewski team led in batting average with .262 while the league hit .238.

Six of the eight teams finished above .500 and will be moving on to Round 3. Joe Charboneau and Bill Buckner got beat up pretty good but will have a second chance in Round 2.