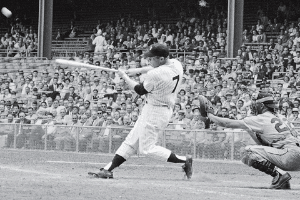 All-Time Great Mickey Mantle appears to be the class of Season 66. He is joined by fellow Hall-of-Famers Earle Combs and Jimmy Collins as well as Al Oliver, Will Clark, Travis Hafner, current star Curtis Granderson, and old-timer Jack Tobin.

I will be unable to do justice to the spectacular eighteen-year career of Mickey Mantle in just a single paragraph. There is just too much! Hailed as the second coming of Babe Ruth, Lou Gehrig, and Joe DiMaggio all rolled into one, a series of injuries and some legendary hard-living kept him from achieving that level. But what he did achieve was pretty legendary in itself: 536 home runs (3rd best when he retired), 1676 runs scored, 2415 hits, 1509 RBIs, 153 stolen bases with an over 80% success rate, and 1733 walks that raised his .298 batting average to healthy .421 OBP. Coupled with his .557 slugging percentage, his .977 OPS is still eleventh-best all time. A twenty-time All-Star and three-time MVP, Mantle was elected to the Hall of Fame in 1974.

Al Oliver is another of my “favorites from childhood.” Primarily a line drive hitter, Oliver the ball for a .303 lifetime average in his eighteen-year career which was shortened by the owners’ collusion in 1986. That collusion probably cost him a legitimate shot at 3000 hits as he retired at a healthy 38 years old with 2743. According to Bill James’ Favorite Toy he had 34% chance. His extra-base hits – 529 doubles, 77 triples, and 219 homers make him dangerous in this playoff and he really ought to be in the Hall-of-Fame.

The Veteran’s Committee voted Earle Combs into the Hall-of-Fame in 1970 and it is easy to see why and why it took thirty-five years for him to be honored. Why it took so long is probably due to a combination of his injury-shortened career of only twelve seasons and playing centerfield next to Babe Ruth for most of them. His credentials are hard to argue with. He banged out 309 doubles and 154 triples while batting a robust .325, still good for 40th on the all-time list.

A six-time All-Star and Gold Glove winner at first base, Will Clark slashed .303 / .384 / .497 during his fifteen-year career with the San Francisco Giants, Texas Rangers, Baltimore Orioles, St. Louis Cardinals. He qualified for the tournament based on his 440 doubles and 937 walks.

Jack Tobin‘s .309 lifetime batting average qualified for the tournament. His thirteen-year career was spent mostly in St. Louis, first with the Terriers of the Federal League and then with the Browns in the American. An unusual hitter, Tobin was both a heavy hitter – 294 doubles and 99 triples – and apparently the best bunter in all of baseball. He was quoted as saying, “I was a .330 hitter most of my career. I’d bat .030 and bunt .300.”

The first third baseman elected to the Hall of Fame (1945), Jimmy Collins hit .294 at a time when third base was primarily regarded as a defensive position. He qualified for the tournament based on his 116 triples hit over fourteen seasons.

The recently retired Curtis Granderson slammed 344 home runs in his sixteen-year career, qualifying him for the playoff. A lifetime .249 hitter, the three-time All-Star stroked 95 triples and his solid walk totals boosted his OBP to .337.

Travis Hafner had a solid twelve-year career, mostly with the Cleveland Indians, where he hit 213 home runs with a solid .273 batting average. His walk totals gave him an on-base percentage over one hundred points higher. He is here based on his placement in the on-base plus slugging list. His total is a notable .874.

Mickey Mantle outdistanced the competition to finish well ahead of the pack. Earl Combs led in batting with .247 vs. the league’s .214 and the Mantle team had 164 of the league’s 621 HRs.

Mantle, Clark, Combs, and Oliver head off to Round 3 and the others to Round 2.