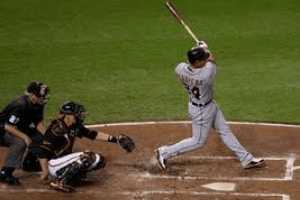 Future Hall-of-Famer Miguel Cabrera has the top seed in Season 65. He will see how he stacks up against current Hall-of-Famers Pie Traynor and baseball pioneer John Ward, as well as Sam Mertes, Bob Meusel, Eddie Stanky, Mookie Wilson, and Topsy Hartsel (14)

Miguel Cabrera is the real deal. Baseball’s last Triple Crown winner (for the 2012 Detroit Tigers), Miggy has put up Hall-of-Fame level numbers in his seventeen big league seasons AND HE’S ONLY 37! His .315 batting average is the highest among active players and he already has over 2800 hits including nearly 600 doubles and 500 home runs. His runs scored and RBI totals coupled with his equally impressive number of walks will make this eleven-time All-Star a player to watch in the playoff.

Until the advent of the “modern” slugging third baseman in the 1950s, Pie Traynor was widely held to be among the greatest of all time. And he has a lot to recommend him. In his seventeen-year career, Traynor was a great fielder who could hit better than most third sackers. His lifetime .320 average was responsible for 1273 RBIs and 1183 runs of his own. 164 of 2416 hits were triples and he was elected to the Hall of Fame in 1948.

John Montgomery Ward was a pioneer of professional baseball, an advocate for player’s rights, and was a heckuva player himself. Starting out as a pitcher, Monte switched to shortstop after he blew out his arm, not surprising considering he threw 2400 innings in his first six seasons. For the next eleven years, all he did was score 1400 runs, hit 96 triples, and steal 540 bases, while hitting .275. Oh yeah, he also got a law degree, started the first player union, started a rival major league, the Player’s League, and wrote book about baseball. He was selected for the Hall of Fame by the Veteran’s Committee in 1964.

In his ten short seasons, Sam Mertes established himself as what passed for a power hitter at the turn of the 20th Century, hitting 188 doubles and 108 triples. Not only did he hit the ball hard, he was fast, too, stealing 396 bases while batting .279.

Part of the New York Yankees famed “Murderers Row,” Bob Meusel was a great fielder with a potent bat, hitting .309 over his eleven-year career and stroking 156 home runs and compiling an .852 on-base plus slugging.

I will be watching Eddie Stanky‘s performance in the tournament. He is exactly the kind of player I a curious about. A three-time All-Star, he only hit .268 in his eleven-year career but combined it with 996 career bases on balls giving him an OPB of .410, good for 35th on the all-time list.

He hit the most famous ground ball in history but there is a lot more to Mookie Wilson‘s career. He hit .274 over his twelve-years in the majors. His 327 stolen bases qualified for the tournament.

Topsy Hartsel jumped from the Chicago Orphans of the National League to join the Philadelphia Athletics of the upstart American League in 1901. The consummate leadoff hitter, Hartsel was fast and an expert at taking a walk which boosted his lifetime batting average from .276 to a .384 OBP in his fourteen major league seasons. He qualified for the tournament based on his place on the Offensive Winning Percentage list.

Traynor and Cabrera are joined by Sam Mertes and Mookie Wilson in Round 3. The others head to the second chance Round 2.