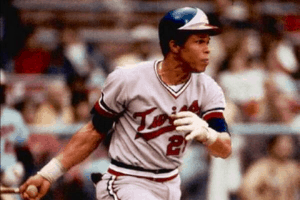 The age I am means that my love of baseball grew up with Rod Carew’s career. Quite simply, he was the best hitter for average in baseball at a time when offense was in extremely short supply. From 1973-78 he averaged .354, picking up 5 batting titles, with a .420 OBP while the league was more like .260. Career-wise, Carew hit .328 with 3053 hits and over 1000 walks, seven batting titles, a Rookie of the Year award, an MVP trophy, and EIGHTEEN All-Star game selections. He was elected to the Hall-of-Fame in 1991 on 401/443 ballots.

Much has been written about Larry Walker since his election to the Hall-of-Fame but his statistics speak volumes: 2160 hits, 471 of them doubles and 383 of them homers look pretty good. His slash line is also pretty impressive at .313 / .400 / .565. Besides, anybody whose Twitter handle is @Cdnmooselips33 is okay by me.

I do not want this to sound like I am knocking Red Schoendienst. He was an all-star second baseman for the St. Louis Cardinals for a decade after World War II. His lifetime statistics are solid: Almost 2500 hits with a .289 batting average and 427 doubles tacked on for good measure. These are almost the definition of “borderline Hall-of-Fame.” His selection by the Veteran’s Committee must have been weighting his contributions as manager of the same Cardinals for two-and-a-half decades. He earned it.

As of this writing, Joey Votto is right on the bubble of a Hall-of-Fame career. At the age of 35, he is hitting .307 and has already managed 284 home runs, has the highest active OBP at .421, and is slugging at a .519 clip. I suspect he will do well in the tournament.

George Gore played for fourteen seasons centered on the 1880s, all but one with the Chicago White Stockings and New York Giants. In that time, he hit .301 and led his league in walks three times. Most importantly for this tournament, he scored 1327 runs which qualified him.

When I was just a lad, Pete Reiser was presented to me in one of my many baseball books as a cautionary tale. I think the title of the chapter was something like “Too Much Hustle.” He broke his arm on a throw while in the minor leagues and didn’t know it until the pain wouldn’t go away after playing with it for two weeks. He played throwing with the other arm. “Pistol Pete” had talent, of that there is no doubt. In his first full season, he led the National League with a .346 average. He also led with 39 doubles and 17 triples! The next year showed more of the same kind of talent until while chasing a fly ball in July, he ran full-speed into a concrete outfield wall, knocking himself unconscious and fracturing his skull. There followed three years of military service in World War II which featured him running through a hedge to catch a fly ball, separating his shoulder. Of course, he solved that by again switching arms to played left-handed. Back with the Brooklyn Dodgers after the war, he continued to go all out, breaking a leg while stealing a base and running into outfield walls and fences over the next two years. All totaled, he was carried off the field on a stretcher eleven times. His career slash line is .295 / .380 / .450 and there is no telling how good he might have been. He is in the playoff for placing among the leaders in offensive winning percentage.

Edgar Renteria was a solid fielding shortstop for sixteen years. During that time he smacked 2327 hits and hit .286. He scored 1200 runs and 436 doubles, which qualified him for the playoff.

Joey Votto put together a 15-game winning streak and had winning records against all of the other teams to take the season. No real surprise, Rod Carew led in batting average with .260 vs. the league’s comparatively high .230, and five hitters – three Carews, one Gore, and one Votto – eclipsed the .270 mark.

Votto and Carew head to Round 3 along with George Gore, Pete Reiser, and Larry Walker, who all had better than .500 records. Figgins, Rentaria, and Schoendienst try to qualify in Round 2.