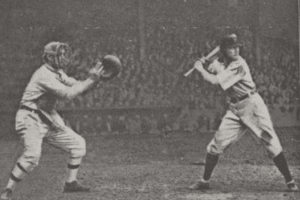 Ed Delahanty was one of five baseball-playing brothers of varying abilities. Ed was the good one, hitting .346 lifetime, fifth highest of all time, and stroking 2597 hits in a sixteen-year career shortened by tragedy – or perhaps, misadventure – at the age of 35. He is our top seed based on his favorable position on the all-time-leaders lists in multiple categories, with 522 doubles, 186 triples, and a .505 slugging percentage.

In his eighteen big league seasons, all with the Seattle Mariners, Edgar Martinez set a very high bar for future designated hitters to reach. Just check out this slash line: .312 batting average / .418 OBP / .515 slugging percentage… that is some terrific production. Of his 2247 career hits, 514 were doubles and 309 were home runs. He was elected to the Hall-of-Fame in 2019.

In the early 1980s, there were few players better than the Atlanta Braves’ Dale Murphy. He picked up a pair of MVP awards and five Gold Gloves in centerfield and was named to seven All-Star teams. Lifetime, he hit 398 home runs and accounted for 1266 RBIs while staying in the lineup almost every day and on the leader boards in multiple categories. He should be in the Hall-of-Fame considering his statistics and the era they were achieved.

If he had hung up his spikes a couple of years earlier, Keith Hernandez would have retired with a .300 lifetime batting average and might already be in the Hall-of-Fame. I mean, look at the stats: .296 batting average and 1070 walks to boost that to a .384 OBP while driving 426 doubles during a time when offense was hard to come by. Along with that, he scored five All-Star games and eleven Gold Gloves. Not too shabby.

Ed Morgan only played seven seasons, six of them for the Cleveland Indians, batting a healthy .313 with a .398 on-base percentage. His other number are nothing to shout about due to his short career but prorated over a longer one, might make him someone to watch in the tournament.

Bill Russell played eighteen seasons with the Los Angeles Dodgers as their regular shortstop, playing in 2181 games, which was enough for him to just sneak into the playoff. He hit .263 and was named to three All-Star teams.

He was big and not at all fast but he could hit a ton. Greg “The Bull” Luzinski smacked 307 home runs and threw in 344 doubles while hitting .276 in fifteen of the most offense deprived seasons in history. A four-time all-star, he twice finished second in the MVP voting.

Still playing, now with the St. Louis Cardinals after eight seasons with the Arizona Diamondbacks, Paul Goldschmidt qualified for the tournament based on his fine .916 on-base plus slugging (.292 / .391 / .524). At age 31, he already has 243 home runs and 1337 hits. I think it is fairly likely that in about twenty years, he will have a plaque in Cooperstown.

The Only Del and Goldschmidt are joined by Keith Hernandez and Edgar Martinez in Round 3. The others head to Round 2.