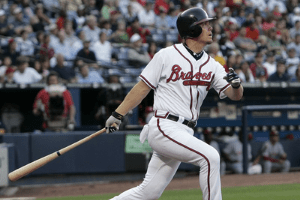 Chipper Jones put together a Hall-of-Fame career over his 19 big-league seasons for the Atlanta Braves. Consistently good, he was selected to eight All-Star teams and picked up an MVP award in 1999. Lifetime, Jones hit .303, while slugging 468 home runs, scoring 1619runs and driving in 1623; All in all, a very productive career and well-deserving of his spot in Cooperstown.

Much has been written about Yankee Hall-of-Famer Joe DiMaggio. In just thirteen years in the big leagues, “The Yankee Clipper” hit 361 home runs, drove in an astounding 1537, and hit a lusty .325. Additionally, he was named to 13 All-Star teams, won three MVP trophies, and played exceptionally well in the cavernous centerfield at Yankee Stadium. Still, one wonders “what might have been.” What if he had made it to the majors earlier? He tore up the Pacific Coast League for three years before joining the Yankees. What if World War II hadn’t intervened? He lost three prime years to that conflict. What if he, a right-handed slugger, had played in Fenway Park? He is held in very high regard as a player and I think it likely that Joltin’ Joe might have been the best ever.

Donie Bush was one of the best fielding shortstops of the dead-ball era, still holding some major league fielding records. But this is Baseball’s Greatest Hitter Playoff, so offensive production is what really matters. Bush only hit .250 in his 16-year career but was an expert at “working the count,” leading the American League in walks five separate times and totaling 1158 bases on balls in his career. He was also adept at stealing bases, swiping over 400, which boosted his OBP to a healthy .356.

In a ten-year career shortened by a bad back, Ralph Kiner still managed to slug 369 home runs, leading the National League for seven consecutive years. He also hit a respectable .279 with a healthy .398 OBP, while driving in over 1000 runs. I wonder what his stats would have looked like playing in a more hitter-friendly park than Pittsburgh’s enormous Forbes Field. He was voted into the Hall-of-Fame in 1975.

Steve Sax played for fourteen years, eight of them for the Los Angeles Dodgers. He was the 1982 Rookie of the Year and was named to five All-Star teams. His .281 batting average was pretty good for a second baseman of his era and his 444 stolen bases qualified him for the playoff.

Greg Vaughn never led his league in any statistical category during his fifteen-year major league career but don’t let that anomaly fool you. He was a feared power hitter, belting 355 homers and driving in 1072 runs. His .242 batting average could hurt him in the tournament.

Adrian Gonzalez had a solid 15-year career, playing for five different major league teams. He was no slouch at the plate, hitting 317 home runs, with 1202 RBI, and a .287 batting average.

Before a series of injuries derailed his career, Kevin Youkilis was one of the top hitters in the game. He hit .281 over the course of ten seasons, slugging 254 doubles along with 150 home runs. He was also great at working the count, sporting a .382 on-base percentage. In fact, it is his on-base plus slugging that qualified him for the playoff. We’ll see!

Joe DiMaggio dominated the competition, starting off the season with 4 wins and 5 losses and then fashioning a 21-game winning streak. He never looked back. Dimaggio led in batting (.229), runs, and home runs. Greg Vaughn brought up the rear with a .154 average, with Vaughn4 hitting a paltry .126.

There were 3 no-hitters plus an 11-inning, no-hit performance by a Warren Spahn that resulted in the win being awarded to Pete Alexander in the twelfth inning.

Dimaggio is joined by the other .500+ finishers, Chipper Jones, Steve Sax, Ralph Kiner, and Adrian Gonzalez in Round 3. Vaughn, Youkilis, and Bush head for Round 2.