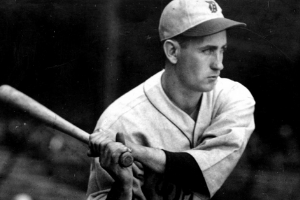 As we finish week four of Round One, we are treated to three Hall-of-Famers in the form of Tiger great Charlie Gehringer, Cubs second baseman Billy Herman, and early star King Kelly. They will combat other old-timers George Van Haltren, Sherry Magee, Tip O’Neill, and Oyster Burns, with a sole modern player, Todd Zeile.

Charlie Gehringer picked up 2839 base hits in his 19-year career with the Detroit Tigers. That was good for a .320 lifetime batting average. While not a home run hitter, he had good power – when he retired he was number seven on the career double list and he qualified for the playoff based on his triples, as well. He could also wait out a pitcher for a walk and even steal a base if needed. Born in Fowlerville, Michigan, about 60 miles from Detroit, went to the University of Michigan in Ann Arbor (even closer), played his whole career with the Tigers, and died and is buried in the Detroit metropolitan area. Tiger blood!

Twenty-five hundred hits, a .316 batting average, over 500 stolen bases, and 161 triples make George Van Haltren someone to watch in the tournament. His big-league career lasted 17 years, mostly before the 1900s.

The first heart-throb of major league baseball, King Kelly epitomized the rip-roaring ball of the 1880s. Hard-playing and hard-drinking, Kelly hit .307, and was the subject of much fawning by the fans of the game. He even had an off-season vaudeville career. One of the first “smart” baseball men, it is said that half of the rules in the book had to be rewritten because he kept finding loopholes.

Sherry Magee had over 400 stolen bases and a .291 batting average. With good power for the dead-ball era, he had a pretty good peak and lost key years of productivity to a broken collar bone. He bears watching in the tournament.

He lost two years to World War II, but Billy Herman also got one in with the fill-ins in 1943. In all, he had a career average of .304 with plenty of doubles.

There is a story here that needs to be told. Tip O’Neill had a lifetime average of .326 and after a brief 10-year career, retired at the age of 32 in the middle of his first “off” season. He deserves to be in the tournament just because of his one year of greatness:

I mean, seriously, what a year!

Oyster Burns is one of those rare birds: a lifetime .300 average and not in the Hall-of-Fame. He also managed 129 triples in his eleven years before 1900.

Eleven teams in sixteen years – twelve teams if you count his two tours with the New York Mets! Todd Zeile made the tournament because of his 945 career bases on balls but there is more here: he had 2000 career hits and 250 home runs. I am curious as to how he will do.

Sherry Magee surprised everyone by jumping up from the fourth seed to finish at the top of the league. Top seed Charlie Gehringer failed to qualify, finishing in seventh place. Magee was second in batting and led in steals. The league average was .225, with Tip O’Neil leading with .247 as a team. The top O’Neil hit .284.

One Oyster Burns had a 23-game hitting streak and there were 3 no-hitters, two of them against Zeile.

Magee and O’Neil are joined by George Van Haltren and Oyster Burns in Round 3. King Kelly and the rest head to Round 2.