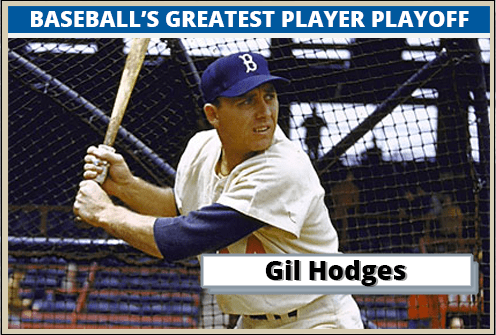 Jimmy Sheckard and Gil Hodges of the Brooklyn Dodgers have the top two seeds in this “go big or go home” season. They will have to contend with the power of Ted Kluszewski and Dale Murphy as well as the solid hitting of Henry Larkin, Wally Pipp, Raul Ibanez, and personal favorite, the ageless Julio Franco. Only the top four finishers are guaranteed to advance.

Henry Larkin picked up his 77th win on the last day of the season, elevating his record to .500 and locking in a position for Round 5. He joins pennant winner Jimmy Sheckard, Dale Murphy, and Gil Hodges who tied for second place, and Ted “Big Klu” Kluszewski who took fourth, despite having the largest run differential of all teams. His 1-11 record in extra innings did him in. Things did not work out for Raul Ibanez, Wally Pipp, or Julio Franco as they did not qualify.