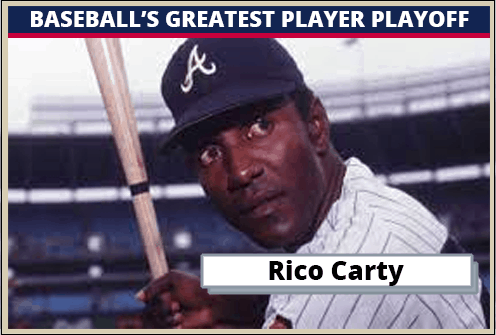 Rico Carty finds himself facing elimination but at least has the enviable spot of “top seed.” He faces Hall-of-Famer Ichiro Suzuki and a bevy of other modern stars in Robinson Cano, Jermaine Dye, Rusty Greer, and Adam Dunn. Also in the mix are Elmer Valo and Carl Reynolds. Top 4 move on, bottom 4 move out.

A strong finish locked up first place for Rico Carty. Reynolds, Suzuki, and Valo also advance. Despite winning his last 7 games, Greer came up 1 win short. He, Cano, and Dye are heading home. Adam Dunn has a sliver of a chance as he had a positive run differential and may get a wild card spot in Round 5.