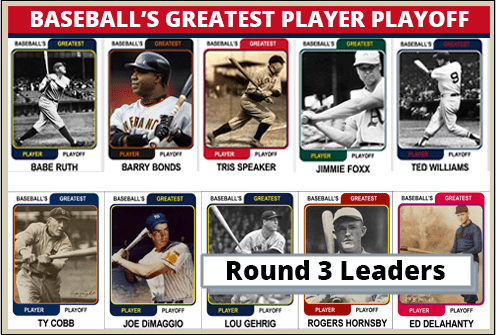 Round 3, Season 61 is in the books and so it is time to get ready for the Round 4, second chance/elimination seasons. All hitters who finished in the top 4 or tied for the top 4 of their specific season automatically advance to Round 5. All hitters who finished with a .500 record also move forward regardless of their finishing position. A total of 260, led by Babe Ruth, qualified under those conditions.

Additionally, nine hitters who finished their specific season with a positive run differential are in the mix for a wild card spot. Those hitters are David Ortiz, Jim Bottomley, Bid McPhee, Tony Lazzeri, Robinson Cano, Josh Hamilton, Herman Long, Cupid Childs, and Earl Torgeson. Wild card spots open up based on the number of hitters necessary to create 8-team leagues. Since we have 219 non-qualifiers, we’ll need 5 more hitters to get a number of participants that is divisible by 8. That means Ortiz, Bottomley, McPhee, and Lazzeri get a free ride into Round 5. The others will have to face elimination in Round 4.

I had originally planned on using the same pitching staff for Round 4 as in Round 3. The way the computer manager used them and how that affected the results made me rethink that decision. The computer manager relied on all the right-handed pitchers, which skewed the results for right-handed batters in a rather obvious manner. Rather than select an entirely new pitching staff for Round 4, I decided to use the pitchers chosen in Round 3 and earlier seasons that did not see as much work. You can see the choices I made for the pitching staff, here. I think I know how I will approach the future elimination rounds going forward.

Round 4 – What to watch for

As this is an elimination round, I am afraid we are going to have to say farewell to some favorites. No doubt, some of them will be surprises and I expect to hear from those of you who have strong feelings about the relative merits of “Your Guy.” But it is important to remember that we are heading to “Just One Guy.” The one player who is the most offensive in history… wait, that didn’t come out as I meant… The biggest offensive threat in baseball history… how’s that?

Just remember, no matter how good I think Rico Carty was, he probably is not going to be the “One Guy.” As sad as it is, he is probably going to be eliminated eventually.