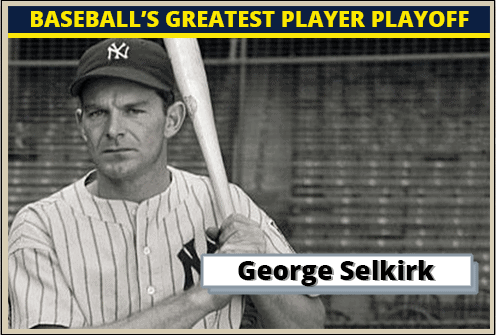 No Hall-of-Famers in this season but certainly plenty of potential. George Selkirk has the top seed and while he is no Babe Ruth, who he replaced in the Yankee lineup, he surely can get on base. We’ll also see early power hitter Jack Fournier and the Giant’s Larry Doyle face up with modern power hitters Ted Kluszewski, Eric Davis, Nelson Cruz, and Jose Bautista plus speedster Otis Nixon.

Played as: Jack Fournier
Full Name: John Frank Fournier (Some sources have his birth name as Jacques)
Nicknames: None

Jack Fournier improved tremendously on his Round One totals, roaring to first place with 101 wins, well ahead of second-place George Selkirk. Jose Bautista finished third and if either Doyle or Davis had won on the last day of the season, the other would not have made Round 5. The others head to Round 4 for a final crack at qualifying.