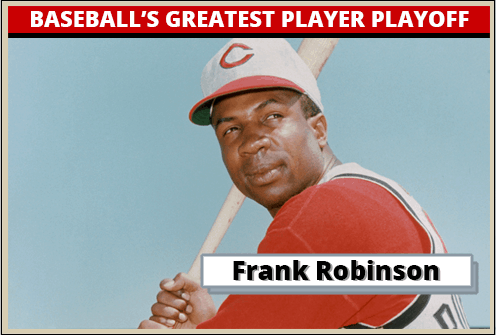 I am excited to see how this season plays out: it is full of some of my favorite players led by top seed, Frank Robinson. Also included are fellow Hall-of-Famers Tony Lazzeri and Jim Rice, as well as oughta-be-in-Cooperstown, Dave Parker, and a personal favorite, Oscar Gamble. I also expect fireworks from Adrian Gonzalez, Gus Suhr, and Carl Reynolds. Let’s roll!

Frank Robinson dominated the competition, winning the team triple crown while also leading in doubles and stolen bases. He finished 24 games ahead of second-place Dave Parker. Oscar Gamble and Jim Rice were tied for third, just one game back. They head directly to Round 5 while Tony Lazzeri, who finished sixth, had a positive run differential and has a chance after we get to the end of the round. The others get another chance in Round 4.