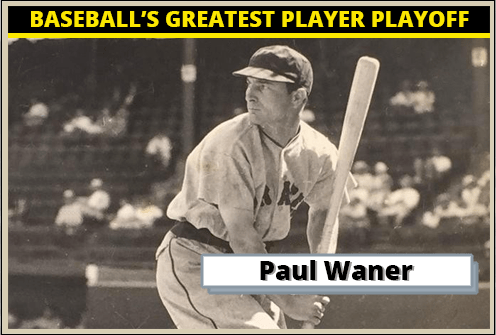 Hall-of-Famer Paul Waner is the odds-on favorite this season, facing fellow Cooperstown inductees Bid McPhee and Joe Tinker, in addition to a bunch of dead-ball era players, such as Hub Collins, Ed McKean, Herman Long, and the nefarious Hal Chase. 21st-Century All-Star Shawn Green is along for a little spice. It takes a top-4 finish to guarantee a slot in Round 5.

Paul Waner had a decisive first-place finish but the battle for second through seventh was waged until the final week of the season. In fact, with a single game left on their schedules, Shawn Green, Hub Collins, and Bid McPhee had identical 76-77 records. Had Herman Long defeated Collins, there would have been a 3-way tie for fourth. Although they failed to qualify, McPhee and Long had positive run differentials which gives them each an outside chance to skip ahead to Round 5. Despite finishing second in batting average, Hal Chase finished dead last. He must have thrown a few games during the season.