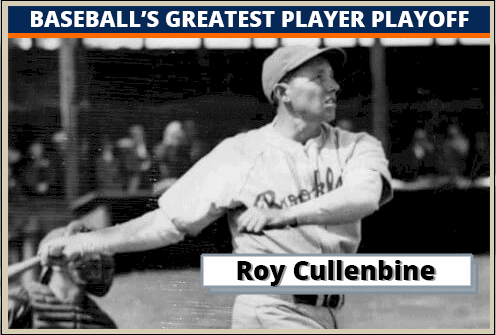 Roy Cullenbine managed 100 wins in Round One. Will he repeat? Hall-of-Famer George Kell has something to say about it! They face a solid slate of challengers in George Stone, Cupid Childs, and Socks Seybold, along with modern stars Vince Coleman, Curtis Granderson, and Raul Ibanez. Only the Top 4 are guaranteed slots in Round 5.

Roy Cullenbine went 23-15 to end the season, roaring past George Stone to take the pennant. Vince Coleman used his exceptional speed lock up third and Curtis Granderson held on for fourth place and a .500 record. Cupid Childs dropped his last two games to come up short but did have a positive run differential, giving him an edge and a possible slot in Round 5. We’ll have to see how things shake out at the end of the round. The others get a second chance in Round 4.