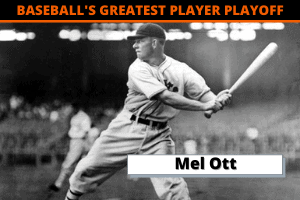 Baseball immortal Mel Ott is our top seed and is joined by fellow Hall-of-Famer Roberto Alomar in Round 3 action. Tough competition can be expected from Rip Radcliff, Stan Hack, Rocky Colavito, Dave Concepcion, Bob Watson, and Buddy Myer. Top 4 finishers get an automatic trip to Round 5.

As might have been expected, Mel Ott led all teams in homers, although he had some competition from Rocky Colavito and Bob Watson, both of whom qualifed in the top 4 slots. Rip Radcliff won his last six, including sweeping the season ending series from Ott to claim fourth place. Hack had a chance to tie but lost in extra innings on the final day of the season. Alomar, Myer, and Concepcion join him in Round 4.