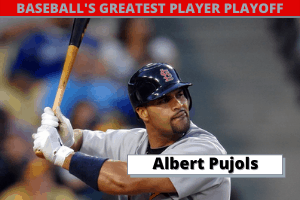 Future Hall-of-Famer, Albert Pujols takes on current Cooperstown enshrinees Lou Boudreau and Joe Torre (in as a manager) and a solid batch of contenders including Maury Wills, Elmer Valo, Fred Lynn, Johnny Pesky, and baseball pioneer Ross Barnes (he of the .360 lifetime batting average!). 154 games will tell us who moves forward and who heads to the minors.

Albert Pujols won handily thanks to his power numbers and Joe Torre and Maury Wills represented opposites in power and speed as they join the relatively unknown Ross Barnes in Round 5. Fred Lynn had a chance but ran into Pujols for the final series of the season. He and the others head to Round 4 for another chance to advance.