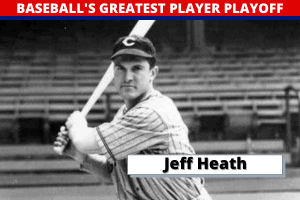 Top seed Jeff Heath leads a diverse slate of competitors. In addition to Hall-of-Famers Carl Yastrzemski and Jim Thome, he will have to contend with dead-ball era star George Van Haltren, mid-century hitting star Dixie Walker, and modern sluggers Todd Helton, Edwin Encarnacion, and Travis Hafner. As you know, only the top four finishers move up to Round 5.

Surprise performer Jeff Heath actually improved on his Round 1 win total, clocking in with an impressive 106 this season. As a team, Heath dominated in average, extra-base hits, and runs as he easily outpaced second-place Jim Thome by 20 games. Todd Helton cruised to third as Yaz, Van Haltren, and Walker took it to the final game of the season with identical 76-77 records.