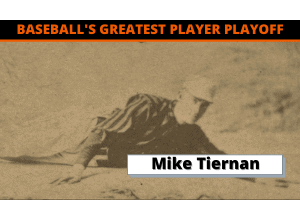 Nineteenth-century star, Mike Tiernan is the top seed in this season that features Hall-of-Famers Duke Snider, Joe Sewell, and Derek Jeter. Also in the mix are “better than his brother Joe” Dom DiMaggio, the man who discovered Babe Ruth, Patsy Donovan, 70’s hitting star Ralph Garr and recently retired Rajai Davis. All are vying for a coveted spot in Round 5.

Over-achiever Mike Tiernan parlayed a 16-8 record in extra-inning games and a 38-21 record in one-run games to a first-place finish despite finishing behind second-place Duke Snider in batting average and runs scored. Dom DiMaggio finished 7-3 to push ahead of Derek Jeter and Patsy Donovan, who tied for fourth place. Garr, Sewell, and Davis try Round 4 for a chance to advance.