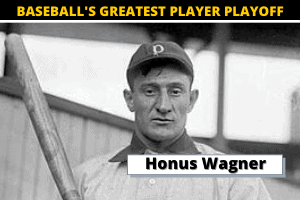 No-Doubt, All-Time-Great Honus Wagner is the only Hall-of-Famer in this season but he will not have a walk in the park. Expect many triples from old-timers Roy Thomas, Mike Mitchell, and Harry Davis and more than a few home runs from the likes of Bill Nicholson, Carlos Gonzalez, and Jose Canseco. Mike Hargrove rounds out the roster to see if OBP is enough to get through to Round 5.

Played as: Harry Davis
Full Name: Harry H. Davis (no middle name; he added the H. to distinguish himself from other Harry Davis’s)
Nicknames: Jasper

Honus Wagner had a 5-game lead by the end of April and never looked back, totally dominating the competition. But with 10 games to go, places two through seven were still in play, with a titanic battle for the final qualifying spot raging between Gonzalez, Canseco, Mitchell, and Hargrove. Gonzalez went on an 8-2 tear to bring fourth place home. He joins Wagner, Nicholson, and Thomas in Round 5.