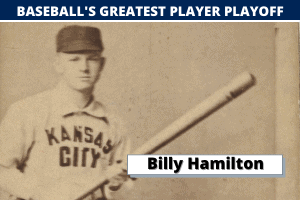 Sliding Billy Hamilton and fellow Hall-of-Famers Jake Beckley and Wade Boggs have the Cooperstown credentials but will face tough competition from old-timers Bug Holliday, Irish Meusel, and Jimmy Ryan and modern stars Willie McGee and Magglio Ordonez. It takes a top 4 finish to move on to Round 5.

Billy Hamilton improved on his first round victory total as he took the pennant with 104 wins. Magglio Ordonez kept Bug Holliday from joining Hamilton in the Century Club, winning his final two games to tie Jimmy Ryan for fourth place. Jake Beckley also made the cut, finishing in third place. Meusel, McGee, and Boggs head to Round 4. Boggs better stock up on chicken!