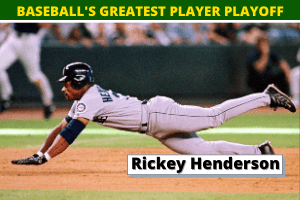 The greatest leadoff man in history, Rickey Henderson and fellow Hall-of-Famer KiKi Cuyler battle against strong competition in third round action. They see how they match up against speedster Clyde Milan, sluggers Paul Goldschmidt, Brian Giles, Lee May, and Vic Wertz and Detroit’s own, Lou Whitaker. It will take a top 4 finish to guarantee a slot in Round 5.

Played as: Lee May
Full Name: Lee Andrew May
Nicknames: The Big Bopper

In a surprise result, fifth seeded Kiki Cuyler found his way to first place in a rather depressed offensive environment. Rickey Henderson followed up his 104 first round victories with a disappointing 72 wins and a fifth place finish despite stealing nearly 1000 bases as a team. Brian Giles, Paul Goldschmidt, and Clyde Milan join Cuyler in Round 5 while the others join Henderson in the Round 4 second chance.